It’s the next readers’ question in Philosophy Now magazine (much recommended, by the way), and when I saw it yesterday, I had a very strong reaction to it that has big implications for Lowimpact’s position on sustainability and democracy – or rather the lack of those things within our corporate capitalist system. I’d be very interested in what you think.

First, truth. I think that truth is unattainable by humans, and should be discarded from the list. I’m not taking the postmodern position that objective truth doesn’t exist – I think it does, but humans wouldn’t recognise it if they saw it. Nick Bostrom, Director of the Future of Humanity Institute at Oxford University, in his ‘simulation argument‘ says that there are three possible future scenarios:

I think that scenario no. 1 is looking more and more likely. We need to change direction completely to avoid it (based on what ecologists are telling us about trends in global ecology) – and we’re not changing direction. Scenario 2 is very unlikely I think. Humans are already building virtual realities – not ones in which the characters don’t know that they’re in a simulation, but hey, we’re only human. Given time, I can’t imagine that this won’t be possible for post-humans to achieve at some point. The time they have to get there is almost limitless, remember. We didn’t have electricity 200 years ago – so where will they be in 10,000 years time? Or ten million? If we don’t become extinct, I think it’s highly unlikely that some sort of ‘Matrix’ scenario (e.g. scenario 3) won’t be possible at some point. Bostrom then argues that if scenario 3 comes about, it’s likely that in time, millions, if not billions of these simulations will be built. So, as there is just one biological reality, but perhaps billions of simulations, it’s more likely than not that we are in a simulation right now. And if that is the case (and even if it isn’t), it’s just not possible for humans to grasp ultimate truths. They’re beyond us – we have no idea why there is existence at all, or whether it is ‘real’ (whatever that means) or simulated. So truth is out – we can only grasp what works in our world, not what is really ‘true’.

Next, happiness. This one is easy, for me at least. Happiness is easily achievable by adding ecstasy or prozac to the water supply – in Brave New World, Huxley called the happiness drug ‘soma’. The savage wasn’t exactly happy, but he was free – a much more important place to be, I think. I know from experience that for most people, the answer to the question ‘would you rather be a depressed human or a happy pig?’ is happy pig. But at the point of choosing to let go of humanity (depressed or otherwise), you’re also letting go of philosophy, reason or any concept of truth, freedom or justice, in exchange for blissful, muddy ignorance. I’d prefer to be a suicidal human for every second of the rest of my life. How far down the evolutionary ladder would you go to maintain happiness? A happy rat? How about a newt, or a fish, a fly or a bacterium? I’d support your decision to go for happiness and abandon philosophical thought if that’s what you want, and I’d try to make sure you were treated well and weren’t turned into bacon. It would be out of your hands though, because you’d be in a world without any concept of freedom or justice.

Which brings me to these two. Freedom and justice – which is more important? Well, for me, it’s not possible to have one without the other. It’s what the traditional ‘left’ and ‘right’ don’t seem to understand, as they each champion one of those values above the other – and it’s why I believe that ‘left’ and ‘right’ are defunct, and only a combination of the best of their approaches will help us unite to get over the extremely difficult and dangerous ‘hump’ that’s approaching fast. And the best of their approaches are of course, freedom and justice.

The right have always valued freedom over justice, and the libertarian ‘far right’ are prepared to sacrifice justice altogether in pursuit of their freedom fetish. If we just get rid of the state, we’ll all be free to do business and make as much money as possible, without having to pay taxes. A world with billionaires living alongside people with barely enough money to survive is what we’ve got at the moment, but in their dystopia, there won’t be a welfare state or free education or health care for the poorest. In their view, billionaires should be free to make their billions – after all, they’ve ‘worked for it’ (they don’t seem to understand the concept of inheritance, or employing other people to make your money for you). Freedom is important to them when it comes to being controlled by a bureaucrat, but not by an employer. That’s different – you can quit and go somewhere else. But in a world where corporations are free from regulation, where will there be to go? This applies more to people in poorer parts of the world. If you’re a worker is a sweatshop or on a plantation, being told that you can go somewhere else if you don’t like it is deeply insulting.

The opposite is true of the left, who tend to champion justice over freedom, and the communist ‘far left’ are prepared to sacrifice freedom altogether in pursuit of ‘justice’ that has to be meted out by a strong state. You will hear the argument that what happened in Russia and China in the 20th century was not in any way communism. That may be true, but state control has always been the result of trying to change society with Marx’s ideas. It’s time the left realised that justice can’t be imposed from above without restricting, or totally removing, our freedom. And it’s time the right realised that true freedom (for all) is impossible in a society with vast inequalities in wealth. Money buys power, even with a state, and without one, it can buy private armies. Warlordism is never far from the surface in stateless societies – look at Somalia.

For justice and freedom to exist (and as I’ve argued, it’s not possible to have one without the other), we have to take the best from the left and from the right, but without concentration of power and/or wealth at the top of a state or corporate hierarchy. From the left – compassion, equality and mutual support; and from the right – enterprise, hard work and personal responsibility. But these qualities need to be nurtured within an organised system – just not organised from above. Power and wealth need to be distributed as thinly throughout society as possible, within structures that don’t allow concentration. It’s not enough to support small businesses (although of course we do support them), because small businesses usually want to become big businesses, and/or are bought by big businesses. The non-corporate and non-state nature of business needs to be designed in from the start. And the thing is, we already have these businesses, and they’re busy providing the essentials of life for us in ways that can’t be controlled (easily at least) by state or corporate empires. Here are some examples:

These institutions are based on principles of justice and freedom, and should be naturally supported by both left and right. We can build a new society based on institutions such as these – and when they look up from their work for a moment and see a common cause, and when the additional component of a non-state and non-corporate decision-making process is included, then we’ll be on the way to a new kind of society. Why should we rely on a state hierarchy that destroys our freedoms, or a corporate hierarchy that destroys justice to provide the necessities of life? The answer is that we don’t – but it’s going to take a lot more hard work and organisation before we can get rid of them. 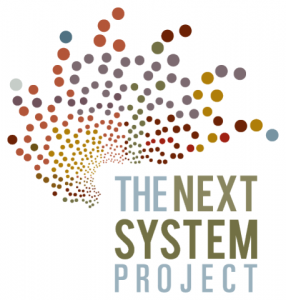