“No one has ever invented a machine that can make baskets.” – Catherine Erdly

It’s creating containers from the weaving of plant fibres. Basketry (the craft of basketmaking) is a tradition in every region of the world where plants grow, and the type of baskets will reflect the naturally-occurring plants in that region. The plant material needs to be long, strong and pliable. Willow fits that bill very well in Europe, and it’s one of the main basketry plants in the UK.

For more on basketmaking techniques, see Baskets in Europe by Maurice Bichard, a wonderful book and a fascinating social history.

You will find these five techniques worldwide, depending on the local plants of any given region. There are many names for different styles of local baskets, often based on their function, for example those used historically in the fishing industry or in agriculture.

Gorgeous, meditative video of Owen Jones making an oak swill basket in his workshop in the Lake District.

Basketmaking is an extremely ancient craft. There is archaeological evidence of twisted flax fibres, possibly for baskets, from 34,000 years ago in a cave in the Republic of Georgia. The first definite evidence of basketwork is from around 12,000 years ago, but the evidence is scant, as the materials are perishable by rotting or fire. However, there have been finds in very dry or boggy environments that date back to the Mesolithic period. Some of the earliest known pottery fragments have been found with basket marks on them. Some believe that pottery developed from baskets that had been lined with clay and left next to the fire, so that the basket burned away, leaving a hard, clay pot. There’s lots of evidence of basketwork since the Iron Age – both for vessels and for wattle panels for buildings, and of woven plant fibres generally, be it for baskets, hunting traps, shelter or textiles.

By the way, we’re not the only species to make baskets, and we weren’t the first. See the photograph below for the handiwork of the weaver bird.

What are the benefits of basketmaking?

How to make a simple coiled basket / bowl from raffia, reeds or grasses.

Attend a course and get hands-on experience. Basketmaking isn’t something you can learn easily from a book, although books can give you lots of ideas after you’ve mastered the basics. You don’t need much equipment to get started – just secateurs and a sharp craft knife. Then practice, practice, practice. As with most things, you need to do it a lot to get really good at it, although almost everyone will be able to make a functioning basket at their first attempt. Plenty of companies sell willow and other materials, and when you learn with a basketmaker, they will give you information on sources of materials; or you could just get out there into nature and see what you can find. Just experiment and see what works well. In the UK the three main traditions are willow, rush and split wood basketry. But there are many other suitable plants in the UK – if it’s long, strong and flexible it’s worth a try.

You could use your new skills to make useful baskets for you and your family. Imagine foraging for berries or mushrooms with a beautiful basket you’ve made yourself. This type of basket would have a handle, and could also be used for shopping, picking apples or for picnics. Non-handled baskets are useful for logs, laundry or harvesting potatoes. Oak swills (large, deep, no handle, made of split wood) can be used as cradles, and hats and even coffins can be made using basketry techniques. A tightly-made coiled basket could even hold liquids!

If you enjoy it, you could think about trying to earn your living from baskets. Basketmaking has to be via small-scale production by the human hand – it can’t be mechanised. Cheap imports from the Far East and eastern Europe have had a profound effect on the UK basketmaking industry, due to the low cost of labour in those parts of the world.

Inspirational basketmaking co-operative in France, turning out incredible works of art, as well as a range of different baskets.

In the last decade there has been a resurgence of basketmaking in the UK – although less of an ‘industry’. It’s now more about contemporary basketmaking – more artistic, as well as functional baskets – and more people are learning how to do it. Often, there used to be one or two basketmakers in a village, churning out the same baskets over and over again (and often these basketmakers were blind). This kind of production has declined drastically in the last 30 years, almost to the point of extinction, as it can’t compete with baskets from overseas in terms of price. Contemporary basketmakers often augment their income by teaching or selling one-off pieces.

If you’re serious about making a living from baskets, it might be an idea to get an apprenticeship with an established basketmaker. You can also obtain City & Guilds qualifications in the craft itself, with relevant business skills, and you may be able to get useful advice and information from the Heritage Crafts Association.

Thanks to Ruby Taylor of Native Hands for information and some of the photographs.

Ruby Taylor of Native Hands has been a maker since she was knee-high, and a teacher for over 20 years. She runs popular courses in Wild Basketry (and Wild Pottery) using foraged materials, which take place in the woods. She has experience of a wide range of basketry techniques, and also works as part of a team teaching ancient crafts and technologies. Her work aims to reconnect to the sanity that comes from being connected to nature and the act of making. 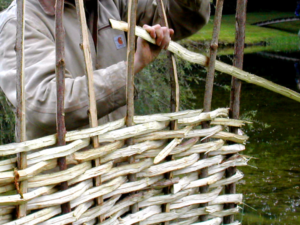 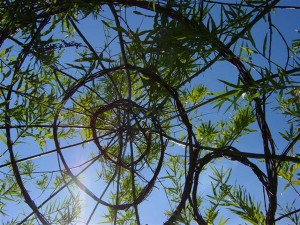 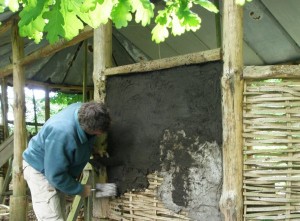