Build your own solar phone charger

Norman Phipps has developed a weekend course on which you can build your own small solar electric panel from the scrap from the photovoltaics industry, with a USB port for a phone charger or an LED light.

Click here for more information and to book on the course. The next course is on the weekend of May 10-12. There is another one scheduled in September, and there will be more depending on demand.

In a previous blog, we explained how Norman has taken this technology to Africa to provide mobile, clean energy for phone charging and for lights to do homework, instead of polluting oil lamps or diesel generators.

In April 2009 I fitted my first solar panel to the narrowboat we lived in at the time. We charged the batteries on the boat every night with a noisy petrol generator, the addition of the solar panel changed this ritual straight away. The solar panel significantly reduced the generator use; it was the physical action of having to lift the generator in and out of the boat which we noticed became less frequent. In a house you wouldn’t notice any difference until your feed in tariff/middle class subsidy payment comes through the letterbox six months later. Within days we noticed the difference on the boat.

In 2009 this 130 watt solar panel cost me £600! This equates to £4.60 per watt, so needless to say I couldn’t afford another one! Off grid solar panels or solar panels designed for battery charging are still expensive in comparison to their grid connected cousins (the ones you see on houses). Prices have fallen dramatically over the past four years; solar panels designed for battery charging are now around £2 per watt, whereas grid connected panels are now less than £1 per watt. The solar PV boom caused by the still very recent introduction of the feed in tariff is likely to account for much of this price drop.

I couldn’t afford another £600 for a solar panel so I started poking around for a cheaper alternative. I discovered that I could buy solar cells for a fraction of the price of a whole panel. I learnt how to solder them together to create my own panel. Solar cells are only microns thin and are the dark squares you can see if you closely inspect a solar panel. They do all the work to produce the electricity but only make up 4.5% of the overall weight of the panel. The rest of the materials keep the cells strong and watertight. These materials are made up of plastics, glass and of course the aluminium frame.

And more about the course:

After my Africa trip I decided to start a training course to teach people in the UK what I had learnt so far. The key part of the UK course would address the process of encapsulating the panel. I found that internet sources seemed to skirt around making the panel watertight. This to me was the most important part. It seemed a waste of time to put hard work and time into a handmade panel only for it to fail after a few years due to water ingress. I decided to use a method to keep the cells watertight from a similar project run by Dr. Richard Komp. This method was designed to use the least amount of the expensive silicone elastomer and had been tried and tested by Dr. Komp during his many projects in South America. During 2011 and 2012 we settled on a design to make a USB solar charger rather than just a solar panel.

We have a cable with 10 different common types of plug including both the old and new Nokia. So you would just point it at the sun and plug it in! We gave them away last time but this time I think we may charge £2 or so just to cover the cost. 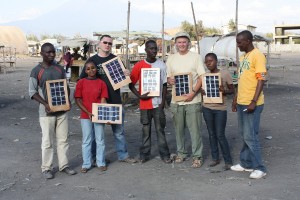 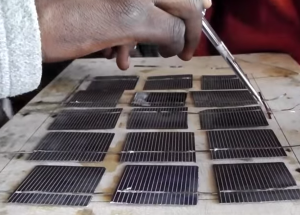 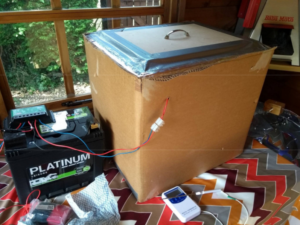