Donald Trump says that when men get together in locker-rooms (or on buses), they ‘talk like that’ with each other. But they don’t – I have male friends, and if one of them talked to me ‘like that’, it would be the end of our friendship. His behaviour doesn’t deserve much respect. Plus, I’m not saying that Trump’s policies will be anti-corporate – far from it, if the team that he’s building around him is anything to go by.

But the left have been fighting trade deals like TTIP, TPP, TiSA and CETA for years. They are corporate trade deals – the only reason they exist is to transfer wealth and power from ordinary people to a corporate elite. There’s no other reason for their existence. In the same way, GM food only exists to transfer control of our food supply to the corporate sector. To claim that it is to combat hunger is absurd, and to claim that TPP and other trade deals exist to benefit ordinary people is equally absurd. And Trump has killed TPP. He at least deserves some recognition for that.

Donald Trump’s view of the world is not mine, but I can see him being a thorn in the side of the corporate elite (so much so that I wouldn’t be shocked if he were assassinated – which is maybe why he says he’ll be spending more time in Trump Tower than the White House.). Trump hasn’t taken office yet, but his election has meant the death of a carefully-crafted corporate trade deal that has the support of all the right-wing think tanks, and that they’ve been working on for years. TPP has gone, because of Trump, and that is a good thing. I’m not saying that Trump is a good thing, but this is. He said he was going to get rid of it, he got elected, and it’s gone. He kept his word. Bizarre, in contemporary politics, but it happened.

And, he said that he would stop government executives becoming corporate lobbyists (he did – at least for 5 years – just because you haven’t been able to bring yourself to watch him delivering his messages, here it is – from 2.05).

I agree 100% – with that part at least – don’t you? And I agree with his professed inclination to stay out of foreign wars. Defence is defence – but US troops on the ground in countries other than the US is not defence. He’s less likely to get embroiled in foreign adventures than Clinton would have been. Again, here it is from the horse’s mouth.

Anything there you disagree with? Again, it’s no guarantee that he’ll do what he says, but he already has on TPP, and at least he’s saying the right things.

I agree with his attitude to trade, too. Let China make its own computers, for its own people, and let America and the UK do the same. Let’s stop employing slaves and children to make our clothes and electrical products, and grow our food. We can do better than that, and we can work with the right to achieve it. Any concerns that economists might have about a slowdown in global growth because of a rejection of trade deals just reinforces the fact that they know nothing about what’s happening to ecology, which in an ideal world would invalidate their discipline.

The rest of Trump’s speech is gumph about putting America first – well, that’s what every elected official tries to do – to put their electorate first. That’s how it’s supposed to work, in the absence of a more co-operative system, and with the ridiculousness of the idea that a politician might stand up and say that they’re going to act on behalf of the whole of humanity rather than the people who voted for them. He knows it’s a capitalist system, and he wants to win. He’s not evil (or at least, if he is, it’s not for that particular reason).

So far, so good – but the largest of elephants in the smallest of rooms is his attitude to the environment – that has to be challenged or we’re in big trouble. It’s a matter of overruling him with rationality. What’s happening to ecology is a question of peer-reviewed science, and peer-reviewed ecologists are telling us that ecology is slipping away from us. You’d have to point to better peer-reviewed science to counter it, but it doesn’t exist. So to the best of our knowledge, we are damaging ecology, and it’s accelerating. If we don’t stop, we could render the world uninhabitable by humans. It’s the first time in history that we’ve had such a capability – in fact it’s looking more and more like a probability than a capability. We have to turn this around, and the first step is to accept that it’s happening. He brags that he has a high IQ, and if so, then understanding peer-reviewed science is the test.

In fact, the recent slowing of growth in Western economies is due to the earth’s inability to provide it, without undercutting our life-support system and without the existence of a magic wand to materialise easily-available resources and waste absorption capabilities that just aren’t there any more. If we push nature, she will push back. So instead, capitalism has squeezed what it always squeezes – labour; and labour has provided a populist backlash that has resulted in a Britain out of the EU and a Trump in the White House – to the astonishment of a metropolitan left that has lost touch with labour on both sides of the Atlantic.

Can Trump bring the right into an anti-corporate alliance? I’ll hold my nose if you will. In the same way, George Galloway shared a platform with Nigel Farage. The very first thing he said was that he agrees with Farage on nothing at all (except the EU) – at 1.30 in the video below; and at 4 minutes, he invokes the memory of the late, great Tony Benn, another anti-EU campaigner from the left.

Now, I’ve had this conversation with around 100 friends, and only managed to convince three-and-a-half of them, so I’m not expecting many conversions on this, but the EU is an unreformable, corporate institution, designed to transfer wealth and power to the corporate sector. Galloway and Farage were right to oppose it, albeit for very different reasons. Mine are nearer to Mr. Galloway’s and Mr Benn’s than Mr. Farage’s.

But never mind – we can agree to disagree on that. I want a world without borders, just not under corporate institutions like the EU (or the World Bank, IMF, World Trade Organisation etc.), but if you think that the EU isn’t an unreformable, corporate institution, I’m not so offended as to not want to work with you. Can we build an anti-corporate alliance of left and right? (I’m neither by the way – I’m unsympathetic to aspects of both – to the left for increasingly believing that capitalism can somehow be reformed and that it is not inherently unsustainable and undemocratic; and to the right for their wilful ignorance of the ecological crash that’s coming.) Is there an opportunity here? If we can build an anti-corporate alliance of all flavours, it will have a much better chance of success.

Let’s take the new right at their word, that they’re anti-elite. Trump is not elite. He’s rich, but he’s not Goldman Sachs. He’s just a bloke in the pub, but with money and a gold elevator. There’s no reason that the right wouldn’t want ordinary people to take control of housing, land, banks and the means of production from the corporate elite. They can join us in developing the worlds of open source, blockchain, co-operatives, planning for self-build, community energy and food, self-employment, small farms, craft skills – there’s no contradiction there.

Racism we can’t put up with, obviously – but the majority are far from racist. If you have thousands of people entering your country to do your job for less money, so your wages are being pushed relentlessly down when you’re already struggling and in debt – whether you’re in Michigan or Nuneaton, a desire to prevent that is not racism. And we can’t have anti-semitism either – yes, Mr Goldman and Mr Sachs were Jews, but that’s coincidental. For many centuries, in Christian and Muslim lands, Jews were the only ones allowed to lend money, because of religious proscription; and lending money is the source of power in capitalism (and therefore in the world). But there are non-Jews at the top of the corporate elite too, and there’s nothing inherent in Judaism that pushes you up the corporate ladder – only past cultural idiosyncracies.

If you want to go into full hyperbole mode, you might say that a Trump presidency is more likely to be damaging to corporate capitalism than a Clinton presidency, so hey, silver linings and all that. Of course, I’m not assuming that Trump is going to act on his stated positions, but at least they’ve been stated, which is refreshing. I think that now’s the time to build a non-elite economy from grassroots, because there might now be a bigger audience for it than there’s ever been. A bit of nose-holding all round, but never mind, we’ll get over it. George Galloway did.

To summarise, Trump’s attitude to the environment is a disaster, but environmental protection measures are ultimately powerless against the corporate juggernaut that the global economy has become. This might be clutching at straws, but it seems to me that a Trump presidency could increase the possibility of a left-right alliance to attempt to halt this juggernaut. Let’s hope so, because without such an alliance, no amount of campaigning, protesting, boycotts or community action is going to do it – it’s too powerful.

Ultimately, perhaps the biggest benefit of a Trump presidency (and Brexit) is that it wipes out the complacency that might have accompanied a Clinton presidency / Remain scenario, and the belief that if only that were the case, we’d be slowly moving in the right direction and everything will be OK. Everything is not going to be OK. Ecological damage is accelerating, which means that we’re on the path to extinction; and wealth concentration is accelerating too, which takes away our ability to do anything about it. Clinton / Remain would not have changed that one iota. Maybe this is the kick in the pants we need to realise that we’re looking at a very serious problem that business as usual, including the Democratic Party, the EU and other corporate-controlled institutions, is never going to solve. 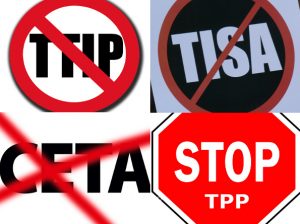