How to prevent desertification and reduce atmospheric carbon by increasing livestock

Desertification is the process whereby grasslands slowly turn into deserts, and suggesting that we can help reverse this process by increasing the numbers of livestock that we run on grasslands sounds counter-intuitive, especially as livestock is usually named as one of the major contributors to desertification.

In the video below, Allan Savory, who has spent a lifetime studying and working towards poverty eradication and wildlife conservation, explains his vision of ‘holistic planned grazing’ as a way to reverse desertification all over the world. It really is a radical vision, and if he’s right, not only could his ideas help to stop the spread of deserts, they could help remove atmospheric carbon, build soils and provide more food for humans.

He explains that grassland turns to desert because we create too much bare ground. Desertification is a potential or existing problem on 2/3 of the world’s land area. Nature always tries to cover ground in vegetation, but in these areas, more bare ground means that when rains fall, the water is absorbed into the ground, but then evaporates because of the lack of plant cover. Then the dry soil erodes away. This process has traditionally been blamed on overgrazing by livestock.

Savory insists that this view is wrong, and in parts of Africa, Australia and the US where livestock have been completely removed, the desertification process has accelerated rather than reversed. For thousands of years, the world’s grasslands have supported enormous numbers of large, wild herbivores, in huge herds that are constantly on the move. This is because with such large numbers of animals, the grass soon becomes trampled and covered with urine and dung, and not fit for consumption. The herds move on to find fresh grass.

When there are no herds of grazing animals, the grass grows to its full height, then dies, whereupon it starts to decay in mats that cover the land and prevent the growth of new shoots. Also, of course, the soil doesn’t get the benefit of the animal’s manure. Sometimes the grass decays completely leaving barren soil, and sometimes natural fires remove the dead grass, but cause enormous carbon emissions and nutrients are lost to the soil. Humans have tended to burn off the dead grass to remove dead material, with the same results.

His point is that if we re-introduce or even just increase numbers of livestock in a way that mimics nature on half the world’s grassland, we could increase plant cover so that potentially, we could take so much carbon from the atmosphere that atmospheric carbon could return to pre-industrial levels. Plus, of course we could feed a lot more people, as livestock is the only way to produce food from the world’s grasslands. 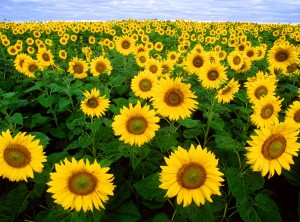 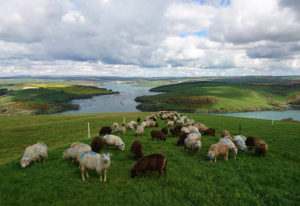