This is an idea that allows you to heat water via solar electric panels instead of exporting surplus electricity to the National Grid. This makes sense because it then means that you can do the work yourself instead of hiring an (expensive) accredited installer – plus you can use second-hand gear.

Those of you who have watched my Youtube channel will be familiar with the way I like to try things rather than listen to the armchair theorists. So, I have been experimenting again, spending a bit of cash, and learning things new to me. This idea however is not new and is startlingly obvious, but works because of a relatively recent piece of equipment called a grid diverter.

Let’s retrace our steps a bit, previously the accepted way of creating hot water from solar was through solar water panels, which are good and absorb different solar wavelengths than solar electric panels. However to install such a water-based system is quite disruptive, commonly involving changing hot water cylinders, fitting pressure tanks and lots of plumbing. Fine if you are doing a household refit, but problematic, although the outcome is lots of hot water.

Consider the alternative in the light of developments in the solar electric world. Solar electric (photovoltaic – PV) panels can be fitted anywhere there is direct sunlight, on a frame in the garden, on your workshop roof, the chicken shed etc. These are easily connected by two wires to a grid inverter mounted somewhere in the dry and with a mains power connection. You can then use your standard immersion heater for hot water and there is no major disturbance. There are other benefits that I will come to later.

A grid tie inverter takes the direct current (DC) output from a number of solar (PV) panels and converts it into alternating current (AC) suitable to mix in with the mains electricity. Think about it as pouring electricity into your mains connection, and this can be through a standard mains plug and socket for inverters up to about 1700 watts.

With a grid tie inverter the number and power of the panels need to be matched to the inverter, so the place to start is with the wattage. Each panel is rated for its nominal output in watts, so with a 1500 watt grid inverter you could use 6 panels rated at 235 watts, or 5 at 285 watts, but you do not have to fit the maximum number of panels as long as the collective panel voltage is within the grid inverter range. Different inverters have varying ranges, but I have noticed that the modern inverters have very wide acceptable working DC voltage range – something like 70 to 500 DC volts. This makes life easier as they will work with a wide range of panel numbers or specifications.

So as an example, take a grid inverter that works within the range of 130 to 320 volts. The 235 watt panels mentioned above will have an open circuit voltage of something like 37 volts. The panels are wired in series and this line of panels is called a string. Hence with six panels in a string the open circuit voltage will be: 6 x 37v = 222 volts, well within range. If you don’t have the room or cash for six panels you could fit five and that would still work but give out less power ( 37 x 5 = 185 volts). In the latter case the maximum output in good bright sunshine would be 235 x 5 = 1175 watts (1.17 Kw). As an alternative you could use a small 600 watt inverter like the blue Mastervolt that works between 40 and 150 volts and works well with 2 panels.

A grid inverter can be connected to any mains connection on your property as long as this will carry the power generated (the small ones are just plug in, see the Mastervolt photo). The power first goes into your home electrical circuit and helps to power the things using electricity at the time. If you don’t use it all then the surplus goes into the grid. If you use more than your generation then the extra is imported from the grid. So when the sun is shining that’s the best time to run the washing machine as you will mostly be powering it from your own generation.

The price of photovoltaic panels (PV) has plummeted, my first panels were £3 per watt last decade, and a recent (and repeatable) purchase of panels was at 0.35p per watt. A similar drop in the solar grid tie inverters has occurred and a second-hand market exists. All this in conjunction with a grid diverter means you can heat your water, run space heating, and contribute to powering you house from a system that is relatively easy to install.

So I have briefly described a grid tied PV system, but there is on more piece of equipment that pulls the whole thing together and makes it much more energy and cost effective. Namely the grid power diverter and there is a video on my channel showing the installation on one of these units. To find it type this into a search engine: “Immersun grid tie power diverter, zero carbon water heating” and you’ll find it.

The Immersun diverter has a sensor that clips around one of your mains power supply cables next to your consumer unit. This tells the Immersun which way power is flowing and how much (import or export). There are several load circuits on the diverter and it powers these heating circuits only from your generated power, so if you are only generating 600 watts then that is all it will put into your immersion heater, and the diverted power will vary with the intensity of the sun on your panels (and the number of panels). If the water is up to temperature then the power is diverted to the second circuit which may be a storage heater. If you have a direct water heating system from a combi boiler then a pre-heat tank can be used. This means that the water is heated in a tank at mains water pressure, so hot water is fed into the boiler reducing the need for the gas boiler to provide any heat. Viridian tanks can take either conventional hot water panels or electric elements driven from the Immersun.

If you switch something on in the house then the generated power will go to that thing and the power diverted by the Immersun will be reduced accordingly, or if it’s a large electrical load it may import power. The main thing is that for the heating circuits connected to the Immersun no power will be drawn from the mains and so there will be no cost. There is a boost function for those grey days in winter and the use of this is down to family education. When your various heating circuits are up to temperature (max 3.2 Kw per circuit) and the thermostats have switched off then the surplus power is exported to the grid. This photo of the Immersun LCD screen shows the immersion heater up to temperature and the amount of electricity being exported. If you were running the washing machine at this point it would be zero carbon and zero cost.

So there you are, an alternative to solar water panels that are easy to fit, will power other things in the home, and can export power when you don’t need it. You can fit second-hand panels and inverters without having to use an expensive MCS accredited engineer. As long as you use a grid power diverter you can gain all the benefits from the electricity with a much lower installation cost. There will be no registering of the system for the now laughable feed-in tariff (thanks to the nasty party who only look after their own).

This idea will work for a wind turbine too, but really only if you live in a very windy area.

I hope this helps you to reduce your overheads and carbon footprint at an acceptable cost.

My video channel is here with lots of wind and solar ideas and experiments:

Practitioner in lowimpact living and author of Wind and Solar Electricity 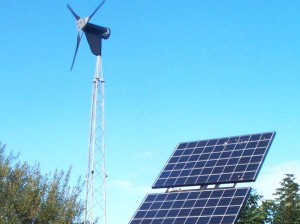 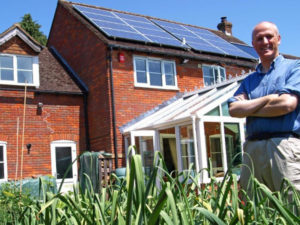 SuperHomes: free open-house events for you to have a look at homes with renewable and energy-saving technologies 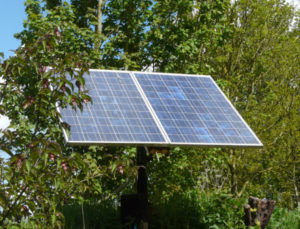 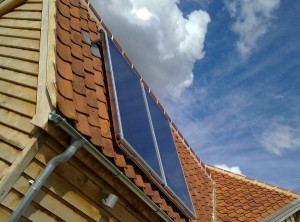