I am often asked to help with other people’s designs, but one of my principles is never to design with cement. Not everyone knows this about me, and I was recently asked what my general experience was with stem walls made of concrete (cement plus aggregate), what are the things to consider or the possible problems with building straw-bales on them. My client went on to say “most of the straw bale builders or straw bale building companies I’ve observed so far in the internet use concrete for their stem walls!? So it seems to work?”

Hmmm. Just because most people do something doesn’t mean it works, or it’s a good idea. This does highlight one of the major problems with cement though, that the problems it causes are not visible or apparent straight away, in fact they can take many years to become obvious. I myself was educated in the use of modern materials and techniques as part of my learning in the construction industry, and I thought, as most people do, that foundations had to be made from cement and bricks had to be laid with a cement mortar. So I know how to lay cement floors and build brick and stone walls, and have done many in my time – but all fortunately now a long time ago.

As I began to learn about natural materials in the 1990s, as well as straw-bale building I studied lime and clay plasters, and cob building. I also had an interest in old houses, and I realised that all our old houses (built before 1900) are built entirely of natural materials, and in fact all old houses everywhere around the world are too. This shows how unbelievable it is that anyone could think that natural materials aren’t durable – but we are all prey to thinking that what everyone does now is better than what people did in the past. There is a common misconception that cement has replaced lime and clay because it does the job better, but I digress…

A major problem with cement and concrete is that it attracts or ‘wicks’ water. If you put a concrete block in an inch of water and leave it for a couple of days, the whole block will get wet. If you stand a piece of wood (or a strawbale) in an inch of water they will both become wet to slightly higher than an inch but no more. They do not wick water. So, using cement for mortars and renders means that when it rains the cement brings the moisture through itself to whatever is behind it. Usually, when it stops raining, most of this dries out again, but not all, and not in damp conditions, or where there is moisture present most of the time. This is why cement should never be used with natural buildings.

In cement foundations, the cement is in contact with the wet earth, so standard practice is to protect the building above from the wet cement by using a damp proof course. More importantly, external walls always contain a certain amount of moisture, due to external rain and internal occupancy (hot showers, cooking etc). In buildings built with cement mortars, this moisture is increased as rain penetrates through the mortar joints. This moisture always travels downwards because of gravity and ends up at the base of the wall. Again, standard practice is to use a cavity tray damp proof course, to direct internal moisture towards the outside of the building. The main reason that people do not realise that cement is actually increasing the moisture content of the building is that the movement of moisture happens very slowly. It can take 30 or 40 years before problems begin to show, which will take the form of moisture build up at the base of the wall, eventually showing as damp problems internally.

When these problems due to the use of cement first started to show, the industry said it was caused by rising damp, and the chemical injection of houses against damp was invented. In fact we now know that there is very little incidence of rising damp, and most damp problems are caused by other things. The Society for the Protection of Ancient Buildings (SPAB) has some excellent research and information on this subject. See http://www.spab.org.uk/advice/technical-qas/technical-qa-20-rising-damp/

Another trend that began was to re-point houses with cement that had been built with lime, and to repair old lime renders with cement renders. No-one knew this was a bad mistake for many many years, because the problems it caused took that long to show. It wasn’t until the spectacular collapse of several cob buildings that had been cement rendered that we started to understand that cement was damaging our buildings, particularly our older ones that were built of natural materials. Again, a sad indicator of why cement should never be used with natural buildings. Today, English Heritage has banned the use of cement on heritage buildings for this reason.

Many modern buildings suffer from condensation problems, and this is a direct result of using cement blocks, mortars and gypsum plasterboard, although this is also because of another of their properties, which is impermeability, they prevent the passage of vapour. This impermeability is another reason why cement should never be used with natural buildings. Lime and clay on the other hand actually regulate humidity and can hold excess moisture within themselves without becoming ‘wet’ and release it as humidity levels drop – they are hygroscopic. This also helps to keep indoor air quality healthy. Lime used as mortar or render outside absorbs water when it rains, and as it becomes saturated this actually prevents moisture passing through it and so it protects the building behind it. When it stops raining, this moisture is released into the atmosphere.

So I return to my client’s question. The fact that so many people use cement does not mean that it “works”! It simply means lack of awareness. Most people are not designing for a 200 year life, as we do. What we see is that houses built in the 1970s (out of cement) are being pulled down and deemed not fit for habitation, when houses built by the Victorians or earlier (cement started being used widely in construction after the first world war) are being renovated (oh no, often with cement) and continue to give good service… until the effects of new gypsum plaster or cement pointing start to cause damp or condensation problems.

Finally, there are many ways to build foundations that do not require cement. All our old houses have foundations with no cement – how could they be otherwise? I have designed several types of foundations that do not need cement, these are available for anyone to use on our website in the Free Information section. All these designs are legal, are approved by Planners and meet current Building Regulations.

I recommend everyone to begin to understand the wonders of lime and clay. I expect that if you do then like me you’ll want to become a Natural Builder!

If you’re interested in learning more about cement and what causes the problems it suffers, here are three blog posts I’d recommend:

Thanks to Oliver at Naturalhomes.org for the image. 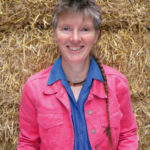 Interested in learning more about straw-bale building from Barbara Jones?

Barbara Jones is the star of our straw-bale building online course. The course contains a range of documents and videos, covering all aspects of straw-bale building, from foundations, walls and roofs to tools, internal fittings and plastering, with lots of tips and inside information. Priced at just £30 for lifetime access, it’s our most popular online course to date. 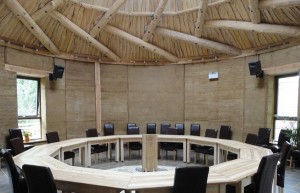 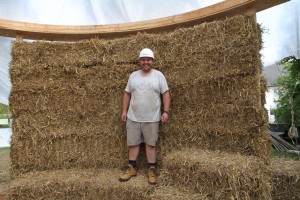 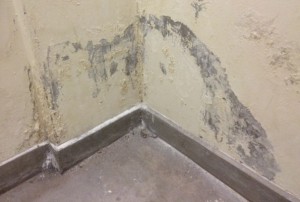 Unless your house is old, you probably don’t have rising damp, and if you do, modern damp-proofing methods probably won’t work 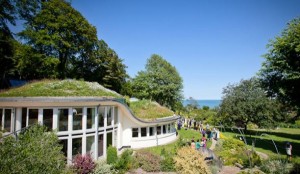 Can you adopt a natural builder for 3 nights in exchange for a free VIP ticket to Ecobuild? 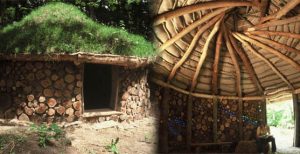 Would you like to help build a 9m roundhouse with a reciprocal, turf roof for the charity ‘Farms for City Children’? 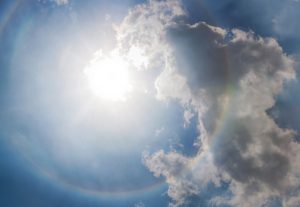 Sigi Koko on the basics of passive solar design 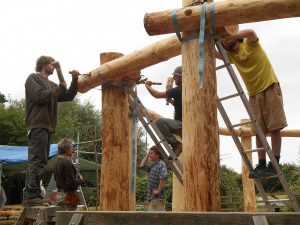 Request for help to build a reciprocal roundhouse for an environmental charity: great learning opportunity, and it’s free 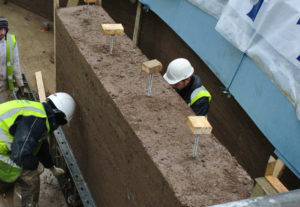 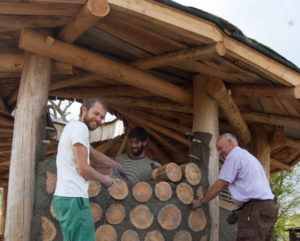 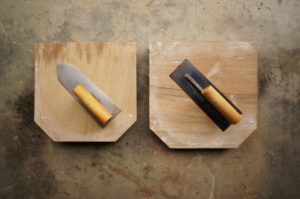 How to make a Japanese plaster hawk for clay plastering 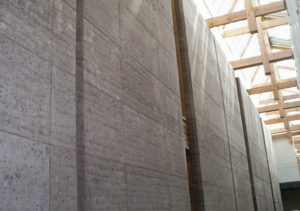 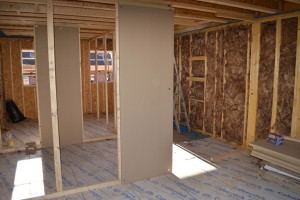 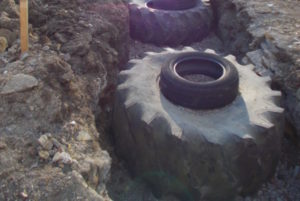 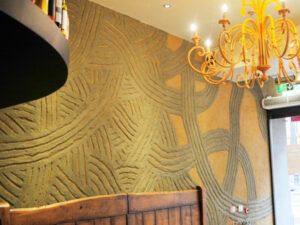 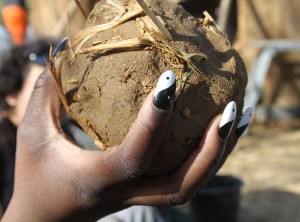 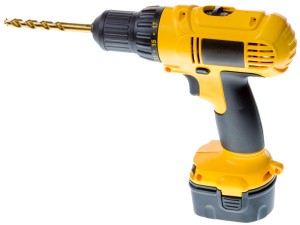 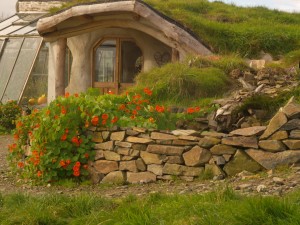 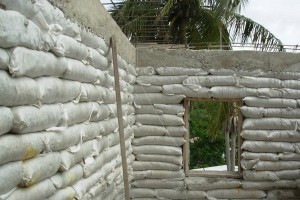 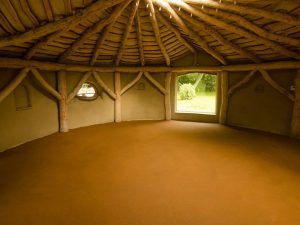 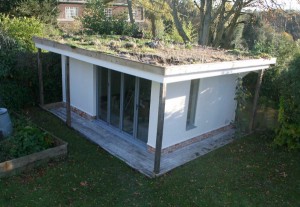 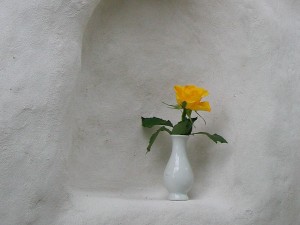