As the winter solstice approaches, Nick Mann of Habitat Aid takes a welcome look forward to the delights of his wildflower meadows in spring.

As the rain carries on lashing down I thought it might be fun to post some photos of our wildflower meadows in spring. Something to look forward to. We have several relatively small areas, which we have sown and managed slightly differently to create different habitats. Contrary to popular belief a meadow doesn’t just burst into flower in mid summer. Our wildflower meadows in spring give colour from as early as February with some coltsfoot (Tussilago farfara), and a reasonable amount of interest from April onwards. The flowering window extends all the way up to cutting in August, when the meadows are full of Common knapweed (Centaurea nigra). In our case it lasts even longer as we’ve got some Autumn crocus (Colchicum autumnale) too.

There’s not much to look at here, at the beginning of March. It looks pretty much like a lawn, but closer examination shows the wildflowers. We’ve kept things tidy – our place isn’t big enough for sheep, so every now and then we mow it over the winter. You can see some unmown swales in the photo too, which are planted with Purple loosestrife (Lythrum salicaria) and another wet loving native plant, Yellow flag iris (Iris pseudacorus). These work brilliantly in wet winters. They’re connected to our main pond and not only slow water runoff, but also give us another rich habitat. We now have a healthy grass snake population, which followed an explosion of amphibian numbers.

By April colour is appearing, along with some insects. I’m not personally a fan of dropping things like Carnassia into meadows, but we have planted some native bulbs, as you see. The Fritillaries should naturalise particularly well as we’re on wet heavy clay. We have dandelions too, of course – such a great resource for early flying pollinators and so cheery – as well as pockets of celandine, primrose and cowslip. They’re a harbinger of the moment the meadow fully explodes into life in May. 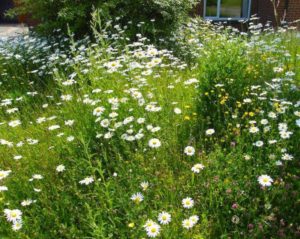 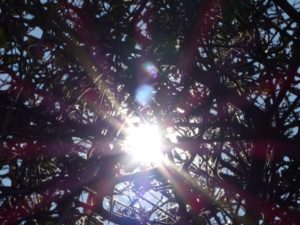 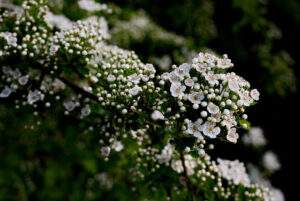