“Give me six hours to chop down a tree and I will spend the first four sharpening the axe.” – Abraham Lincoln

What are felling axes and crosscut saws?

Felling axes and crosscut saws are edge tools made from tool steel (hardened to maintain a sharp edge for longer). They’re the manual tools for cutting and chopping wood that have evolved over thousands of years and become in their own way extremely sophisticated and efficient. Essentially, they are an alternative to chainsaws, without the engine, moving parts and burning of fossil fuels – but the cutting technology is no different.

Axes have been around longer than saws. A felling axe is a cold, brutal lump of steel on the end of a stick, with a razor-sharp edge. It has exactly the right weight over the length of the tool so that when swung, the edge is driven into the wood with a huge amount of force. The profile of the tool is honed to give exactly the right combination of cutting and wedging. For example, a cut-throat razor is very fine and only cuts, whereas a splitting axe or maul (used for splitting logs rather than felling trees), is very wide and only splits like a wedge. A felling axe is a combination of these 2 functions – first the cut, allowing the axe to penetrate into the timber; then the wedge, splitting a chip of wood out of the cut.

Crosscut saws are usually operated by two people – one at each end. They’re used for both tree felling and cross-cutting. They come in a variety of lengths and tooth configurations. The easiest to maintain is the peg tooth configuration – the same as on a normal panel saw. The only company still manufacturing crosscut saws in the UK is Flinn-Garlick, and they only manufacture saws with this tooth arrangement. Saws come in a variety of lengths depending on the wood you’re cutting. The smallest can be around 3ft (1m).

Teeth on a crosscut saw are ‘set’, which produces a wider cut than the thickness of the saw. To visualise this, put your hands together and push your fingers through each other so that the fingers of each hand point in opposite directions – so that the distance between the tips of your fingers is greater than the width of your two hands. This means that the cut will be wider than the thickness of the saw blade, and prevent it getting stuck.

What are the benefits of felling axes and crosscut saws?

Go to any woodcraft fair, and it’s highly likely that you’ll see a comic demonstration involving a contest between a chainsaw user and a two-person crosscut saw team cutting logs of the same diameter in two. It’s usually a very close call – sometimes one wins, sometimes the other. There are some additional factors behind this simple contest. The first is that in reality, if this contest was run over the course of a day, the chainsaw operator would win. However, for a more detailed comparison, we should factor in the embodied energy of the equipment, plus the fuel used in the chainsaw versus the food going into the people doing the cutting.

If you’re felling and cutting up the odd tree, as on a smallholding – if you do without a chainsaw, you might spend £170 on the axe and the saw, which will last for the rest of your life (and maybe your children’s). The chainsaw, plus protective gear and certification course can come to over £1500. Then the chainsaw will break after a certain number of years use, and of course there is the consumption of fuel over its lifetime, with the accompanying monetary and environmental cost.

Here’s the rub: when chainsaws first appeared, they represented a huge technological advance that gave a competitive edge to the people who could afford them. Then the technology becomes universally available – everyone’s got one and the technical advantage is lost. The economy then adjusts itself to account for this new situation, and at that point, no-one can afford not to use chainsaws, because they won’t be competitive. Everyone is locked in to the new technology. Then production increases, and the flow of raw materials into product increases to the level that the new technology will allow. The result is that the raw materials become devalued, as does the product. The market demands a higher level of throughput of materials, whereupon everyone is operating on a level playing field again – no-one is better off, but everyone is forced into making more product and using more raw materials. Then the next technical advance comes along, and it all happens again. This is true for the entire economy, not just wood processing – it makes it difficult for people to hang on to sustainable production methods, unless people are prepared to pay a premium for sustainably-produced things, or they are subsidised, or the more environmentally-damaging production is handicapped in some way.

Imagine a small community, in which one person has a tree they want to cut down for firewood. Using a chainsaw, that individual goes out, cuts the tree down, processes it, burns it, then needs to cut another tree down. A system with axes and crosscut saws requires more than one person. When a member of the community needs a tree cutting down, there needs to be collaboration to do it. Tools that promote collaboration have greater value when it comes to community cohesion than tools that promote individual power, and in the case of hand tools, they are more sustainable too. Community resilience is increased by the fact that it is not so reliant on external inputs of fossil fuels and high-tech equipment, and the huge corporate network behind it.

We’re not saying let’s get rid of chainsaws – that would be far too daunting for most people working in forestry. But for smallholders, for whom felling trees / processing wood doesn’t represent a large percentage of their work, they might want to consider it. NB: in the US, national parks are managed using hand tools not chainsaws – good on them.

Axes can be purchased second-hand at woodcraft fairs, or second-hand tool shops, market stalls or online; or new from a variety of UK blacksmiths specialising in making tools. Saws – again, second-hand as above – or new from Flinn-Garlick.

Regular maintenance and sharpening is essential, as with any tool. The felling axe is easily maintained by use of a hand sharpening stone, which can be carried in your back pocket; and the axe can be used to fell the timber to make its own handle replacement for that time in the future when it might become broken. Axe handles are usually from ash if made in the UK – it’s the timber with the most reliable combination of strength and flexibility. Hickory in the US, or where available (hickory is stronger than ash). New axe heads can be made by a good local blacksmith who is able to make tools.

Saws must be stored well and oiled when not in use, to prevent rust. They can easily be maintained and kept sharp with a small file – as with a chainsaw.

See here for more on maintenance of axes and here for crosscut saws (oldies, but this technology really doesn’t change very much).

With axe felling, there is serious potential for injuring yourself. We advise people to learn how to do it first. Online research and reading are good, but preferably go on a course – to do it in the presence of someone who knows what they’re doing. See here for more on using an axe.

This is a description of the general order in which things are done when felling a tree. It’s a dangerous activity, and anyone attempting to fell trees with any equipment would be well advised to study the art of safe tree-felling first. Assuming that you are armed with that knowledge, if you wish to fell a tree with an axe and/or a crosscut saw, here’s the basic idea.

One creates a bird’s-mouth cut or a face cut, as it’s commonly called – a 45 degree wedge-shaped cut on the side of the tree facing the direction you want it to fall. Then use the saw to make a ‘felling’ cut from the other side of the tree towards the wedge cut, leaving a hinge of timber to control the direction of fall. You may need a wedge to shift the tree past its centre of balance and fall, in some situations. Some trees fall of their own accord. The order and angle of cuts are exactly the same as you might be used to using when felling with a chainsaw. See here and here for more information about felling using hand tools.

Felling a mature oak tree in Gloucestershire with hand tools.

There are no laws covering this – only about whether you can fell the tree or not; and no official training is required by law for felling trees by hand.

By the way, each of the two people using the crosscut saw will take it in turns to pull, never push, because pushing could bend the saw and make it stick. Pulling keeps it straight.

Thanks to Adrian Leaman of Wholewoods for information and pics.

Adrian Leaman of Wholewoods helped Ben Law to build his Woodland House in 2002, and since then has been roundwood timber framing, particularly reciprocal roof roundhouse building, and sharing woodland and woodcraft skills with people from all walks of life. He is a Forest School Leader and works with adults and teenagers on educational projects. 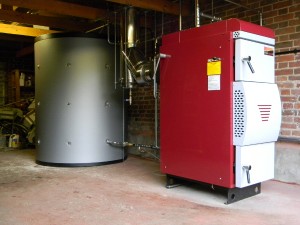 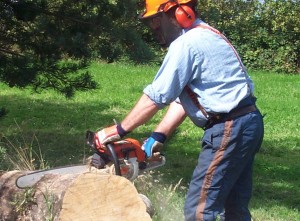 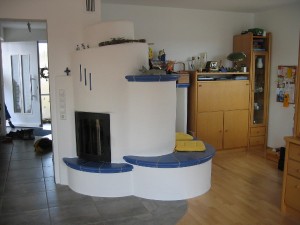 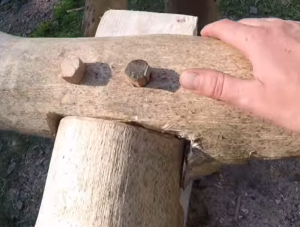 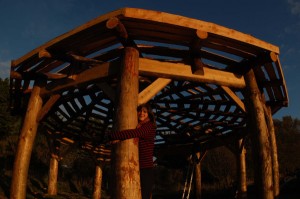 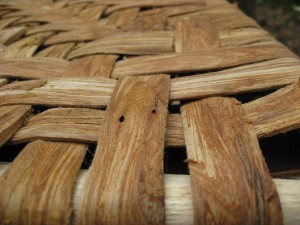 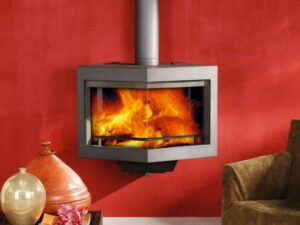