“People have to move in order to stay healthy, so we might as well use that energy to operate machinery.” – Kris De Decker

What are pedal-powered machines?

Pedal-powered machines can either be driven directly by the turning pedals, or by electricity generated by the turning pedals. The former is very simple, relying on belts, friction wheels and / or gears rather than motors, batteries or inverters – although they’re used for machines that involve motion, like grinders, blenders or sewing machines (and of course, bicycles!), rather than non-moving or digital kit like lights, laptops or TVs.

Pedal-powered generators have been around since at least the early 1900s, when they were used during WWI to power field radio equipment. You can use a regular bicycle with a generator on a modified training stand (used by cyclists for indoor exercise during the winter). The stand is adapted by replacing the resistance unit (the bit that makes you feel like you’re cycling on the road) with a plate on which a generator is fixed. When pedalling you spin your bike wheel, which spins a roller, and in turn spins a series of magnets in a motor that creates an electromagnetic charge.

But a DC current is ‘spiky’ – depending on how hard you pedal, you create different voltages (resulting in very jerky electricity) – anything between 0-60 Volts. Most DC appliances (typically used in caravans or boats) need a smooth 12V, so the voltage needs to be regulated. A regulator can be included in a DC system, and can be set from 0-30V depending on what you’re trying to power.

So let’s say the voltage is set via the regulator to 12V. You can plug in a 12V appliance, pedal away and power it in real time with no battery storage. Or, you could connect an inverter that would allow you to power standard 240V household appliances. Pedal-powered generators can also be used to charge batteries, so that the energy can be stored for later.

However, you can do more work by not generating electricity at all. For example, you couldn’t pedal hard enough to generate enough electricity to power a 600W blender in real time. But you could work the blender directly via a roller on the wheel, connected to the drive shaft with the blender blade on. There are washing machines run directly from pedal power, and even Scalextric tracks.

First of a series of 6 videos on how to build your own bike generator. The rest are here, and here are some more free plans.

What are the benefits of pedal-powered machines?

You can’t power an entire house via pedal-power. A fit (every day) cyclist may generate an average of 70W for an hour, and 160W in short bursts; and a Tour de France rider can sustain approximately 400W, or up to 1kW peaks! Let’s work with a figure of around 100 Watt-hours from an hour’s cycling. A unit of electricity on your bill is a kilowatt-hour (1 kWh), so you’d be generating one-tenth of a unit of electricity with an hour’s cycling – the value of which would be less than 2p. But you can power small items as you’re using them, and bigger things if there are several cyclists working together; or you can re-charge things like laptops, mobile phones or batteries, whilst exercising.

Even a relatively unfit person could generate around 50W consistently for an hour or so (and of course, the more you do it, the fitter you’ll get). So if you have a 50W TV you could power that directly, and watch it while you’re cycling. You can check the wattage of your appliances by looking for a sticker on the bottom or back of them.

You can power all sorts of things. For an average person, powering a radio is very easy – as is charging your laptop. One person could charge 15 mobiles at the same time. You could run a small stereo, three or four energy-saving light bulbs or a small LED projector with one bicycle.

Maya Pedal – developing all kinds of pedal-powered machines for everyday tasks and for small businesses in rural Guatemala, including making shampoo and grinding coffee.

You can power all these things directly, or you could charge a battery. A 12V leisure battery (used in caravans) is good, and a deep-cycle battery is best of all as it can be discharged more often and more deeply. You can connect an inverter to the battery if you want to power 240V appliances.

Because of the small amount of electricity generated, you might decide instead to power equipment directly, rather than to generate electricity to do the work – to cut out the middleperson, so to speak. Search online for ‘pedal power plans’ to find plans for food blenders, woodworking tools, pumps, drills, potters’ wheels or wool carders, as well as for generators.

You can buy a pedal-powered generator, or make one. It depends on you – are you a DIY person or not? Do you know something about electrics? There are several options to suit all:

Thanks to Barbora Patkova of Magnificent Revolution for information.

Tom Dixon co-founded V3 Power in 2006. Tom has a background in physics and is V3’s most rounded engineer. Over the years he has designed and built many human-powered generators. 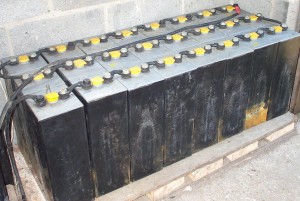