“The use of plant oil as fuel may seem insignificant today. But such products can in time become just as important as kerosene and these coal-tar-products of today.” – Rudolf Diesel

What is veg oil motoring?

Rudolf Diesel’s first engine ran on vegetable (peanut) oil. You can do the same thing today, but some modifications to your diesel vehicle will be necessary for veg oil motoring (it’s not possible to convert petrol vehicles to run on vegetable oil).

Veg oil is too viscous to use directly in an unmodified vehicle, so there are two ways that viscosity can be reduced:

Biodiesel can be used in any diesel vehicle, and mixed with mineral diesel in any ratio. Straight vegetable oil should not be used in an unconverted diesel vehicle, due to its viscosity, and the fact that the glycerine content may cause ‘coking’ of fuel injector heads and possible engine failure. It’s perfectly legal despite the reports of arrests in Wales for driving on veg oil (they weren’t paying road fuel duty).

What are the benefits of veg oil motoring?

Vegetable oil is a biofuel, and as such is virtually carbon-neutral. This means that the carbon dioxide (CO2) released when the fuel is burnt is absorbed by the plants that will provide the next crop of oil (although we only support the use of cleaned, waste cooking oil – see below).

As CO2 is the main greenhouse gas, switching to biofuels can help to slow global warming. Emissions are cleaner too – sulphur is eliminated, and a range of other pollutants are reduced dramatically (including particulates, carbon monoxide, and unburnt hydrocarbons).

These environmental benefits also apply to biodiesel, but if you’re sure that your car is worth a conversion to be able to use straight vegetable oil, this is a more environmentally-friendly option, as there will be none of the problems associated with the waste from the biodiesel production process.

As the world moves towards electric vehicles, this topic becomes less relevant. However, we don’t know what’s around the corner, and diesel engines may be required for agriculture and distribution in case of breakdown of essential supply chains for whatever reason.

Petrol vehicles can’t be converted to run on veg oil – it’s for diesel vehicles only. For more on which vehicles are more easily converted, see the discussion here.

You can buy cooking oil in supermarkets, although we don’t recommend virgin oil as it means using land to grow fuel for cars instead of food for humans. See here for information about obtaining used cooking oil (cleaned or uncleaned); and here for advice about buying from eBay.

The 2 main pump manufacturers in the UK are Bosch and Lucas. To run on veg oil a Bosch pump is preferable. Lucas pumps have a ‘paddle’ mechanism which can’t cope with the heavier veg oil. A good mechanic can swap a Bosch pump for a Lucas.

An extra tank is added for veg oil. You start with diesel, then switch to veg oil when the engine is hot, and it’s continually heated via a heat exchange system. Before stopping, switch to the diesel tank again so that there will be mineral diesel in the fuel line when you come to start your car again. Cost installed c. £800. DIY kit c. £400

It’s simpler – you don’t have to remember to switch to mineral diesel near the end of your journey, and veg oil and mineral diesel can be mixed in the same tank. A simple one-tank conversion involves pre-heating the oil before it gets to the cylinders, and is only possible with indirect injection vehicles (D, TD, not DI, TDI, HDI, SDI etc.), because they have a separate chamber for atomising the fuel before it reaches the pistons, so cold starting on veg oil is fine. Also, a new, wider fuel line is installed between the fuel tank and the heat exchanger, because of the extra viscosity of vegetable oil. Cost installed c. £600.

German kit with a few installers in the UK. They’ve designed an engine where veg oil is the fuel and the coolant, so it gets continually heated. When starting from cold, there’s an electrically-heated jacket on the fuel filter. However, they advise against using waste oil.

In a conventional diesel engine, fuel is initially sprayed onto a heater plug at the top of the chamber (which is why you have to wait a few moments for the plug to heat up when starting a diesel engine); in an Elsbett conversion, the heater plug stays on until the engine is up to temperature. Cost installed c. £850-1300, depending on vehicle. DIY kit c. £550-750. More difficult than the other two conversions – a job for experienced mechanics only.

Road fuel duty is payable for veg oil in the UK, but the rates change. Contact HM Revenue & Customs for advice.

Whilst you’re here, why not take a look at the other 10+ transport topics available? And don’t forget to visit our main topics page to explore over 200 aspects of low-impact living and our homepage to learn more about why we do what we do 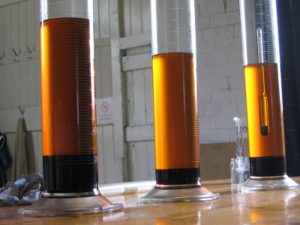