“All Fungi are edible. Some fungi are only edible once.” – Terry Pratchett

Mushrooms are fungi, which have their own kingdom within biology – they aren’t plants (even though they’re listed in our ‘plants’ section; sorry – poetic licence) because they have no chlorophyll and so can’t manufacture their own food (and therefore don’t require sunlight). They have to absorb food from elsewhere, by:

They play a vital role in ecology. They are nature’s great recyclers; their main foods are lignin and cellulose, which they break down, enabling decomposition and soil development on a huge scale. Also, the mycorrhizal relationship often allows plants to survive in otherwise hostile conditions.

There are millions of fungi species globally, most of which are micro-fungi such as yeasts, moulds and slime-moulds. There are around 15,000 species of macro-fungi – i.e. mushrooms – but also puffballs, bracket fungus, earth stars, morels and subterranean fungus like truffles, none of which are technically speaking mushrooms. Of those 15,000, probably 100 or so are good to eat, 200 are poisonous, and 50 deadly poisonous. Some of these can be found in the UK.

Some people are interested in the beauty/ecology of fungi, but for foragers, the main questions are: ‘can I eat it?’ and ‘how good is it?’ The history of eating wild mushrooms goes back millions of years to before there were humans (which is bit mind-boggling), and so the knowledge of which species were poisonous would have been passed down through the generations. Problems would have occurred when humans migrated and colonised areas with unfamiliar species. Obtaining new knowledge would have been haphazard and dangerous.

What are the benefits of mushrooms?

Be careful. The first thing to mention is a list of ‘don’ts’ that it’s very important to read, understand and follow. Deadly mushrooms are relatively rare, but they do occur, and they occur randomly, so sooner or later a forager will come across them. Don’t be reckless – only pick mushrooms if you’re absolutely sure what they are.

A selection of edible wild mushrooms

There is a family of mushrooms called web caps, for example, in the genus Cortinarius, which has over 800 species, and we don’t know whether half of them are poisonous or not. Some are known to be deadly, and mycologists suspect that many of the rest are too. But the point is that it’s not sensible to take the risk – even an experienced mycologist wouldn’t. In a famous case, Nicholas Evans, author of the Horse Whisperer, ate some deadly webcaps, which caused renal damage requiring a kidney transplant.

And some poisonous ones to avoid

Knowledge gained in one part of the world can’t be taken for granted in another – some mushrooms that are edible in one country have deadly lookalikes in others. A Thai woman died after collecting and eating death caps on the Isle of Wight. Death caps are not found in SE Asia, but look just like ‘paddy straw’ mushrooms which are, and are commonly eaten.

Don’t pick young mushrooms – firstly because they haven’t had chance to drop their spores, and secondly, they’re more difficult to identify. Young specimens can be saturated with colour, which fades when it grows and the cap spreads. Also, don’t cut or snap off mushrooms, but pull the fruiting body out whole – some identification features can be found right at the base.

Fungi concentrate contaminants, unlike plants, so you mustn’t collect from places that may be contaminated. So, not from roadsides, as there may be lead or particulates in the soil – but also, a city park may have previously been the site of a factory, and mushrooms may contain mercury or other toxins. After the Chernobyl disaster, mushrooms absorbed contaminants from radioactive fallout, and a number of people died after eating them.

Sorry to drone on about this, but with this topic, it’s far and away the most important point. We don’t want to lose you. Click here for more safety advice.

Once you understand the dangers, you have to invest time to gain identification knowledge. Attend foraging courses to experience mushrooms in the wild, then back up and refine your knowledge with good books or websites (see resources) – compare drawings and photographs in different books / websites rather than relying on just one.

There are 4000 species of larger fungi in the UK, so it’s probably better to focus on the most common species – edible ones like porcini, chanterelle, hedgehog fungus, field and wood blewits, parasol and shaggy parasol, morel, champignon, puffballs, horn of plenty and chicken of the woods (as long as it’s not growing on yew trees); but also make sure you can recognise the most common poisonous ones, with scary names like death cap, destroying angel, satan’s boletus, poison pie and the sickener.

After you’ve attended a course, start exploring (quickly, while it’s still fresh in your mind). Get to know your local sites well, and in different seasons – you’ll find different species in woodland and pasture. If you find good locations, mushrooms will fruit there year after year. Get to know your local tree species too – host trees can rule out some fungi species when it comes to identification. We stress the local though, because driving the length of the country to go foraging negates any environmental benefits.

Hunting for truffles in woodland with dogs.

Autumn is the best foraging time as it’s the mushrooms’ work season. They appear in large numbers because it’s wet, and leaf fall after the summer means they have lots of food. Never collect in plastic bags, as it makes the mushrooms sweat and accelerates decomposition. Baskets are best, as they allow air to flow.

You need to ask permission if the land is privately-owned, but public land should be fine, except for SSSIs or National Nature Reserves, because although you aren’t doing harm to the fungus body, you might be doing harm to rare insect species that may use the fruiting bodies for food or for laying their eggs on. This may be fine with a few people collecting a couple of kilos of mushrooms, but nowadays, commercial collectors could have perhaps 20 people out collecting a few kilos each. This is too much of an impact, and the Federation of Wildlife Trusts has banned mushroom collecting completely from SSSIs.

Here’s a code of conduct and more on the legal aspects of collecting mushrooms.

Keep your mushrooms cool, and eat within 2 days of collecting. It’s perhaps best not to feed wild mushrooms to children, the old or the infirm, as they’re less likely to tolerate any toxins that may be present. If you’re at all unsure, keep one mushroom in the fridge in case anyone is taken ill.

There are plenty of good recipe books. Simple dishes seem to work best – not so elaborate that they swamp the delicate flavours of the mushrooms. Wild mushrooms work really well with game.

You can preserve / dry / smoke mushrooms if there’s a glut. They can be preserved in olive oil or clarified butter, which will extend their life for a few weeks – they can be served as antipasti. Cooking and freezing will preserve them for several months – giant puffballs for example, which you can’t really dry. This is true of other species too – the flavour doesn’t concentrate. The best for drying is probably the cep/porcini, which is great for flavouring pasta, soups etc. Champignons and morels are good too. Dried mushrooms can have a shelf-life of several years if stored in Kilner / airtight jars – but if any moisture gets in, they’ll become mouldy and unfit for consumption. Morels are the best species for smoking.

Thanks to Clifford Davy of Forest Foragers for information.

Geoff Dann is a fungi and foraging expert, teacher and writer who runs Geoff’s Fungi & Foraging. He spends his autumns accompanying small groups on walks in search of fungi on public access land, and collaborates with landowners to offers longer courses for larger groups. Geoff gives talks, and brings a selection of whatever is currently available for people to try. He’s also available for foraging and fungi/plant ID sessions at all times of the year. 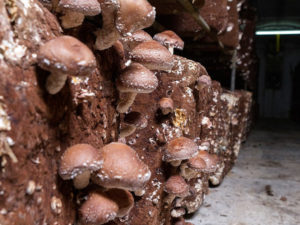