Today I’m talking with Brian Czech, the president of CASSE (Centre for the Advancement of the Steady State Economy). He served in the U.S. Fish and Wildlife Service from 1999-2017, and as a visiting professor of natural resource economics in Virginia Tech’s National Capitol Region. He is the author of Supply Shock, Shoveling Fuel for a Runaway Train, and The Endangered Species Act: History, Conservation Biology, and Public Policy, as well as over 50 academic journal articles.

Hi Brian. Seems strange to talk about stabilising the economy now, during the coronavirus crisis, when the global economy is going into recession. but all governments are chomping at the bit to get back to growth. You don’t think they should, do you?

No. The economy is in recession – so what we do after the worst of the pandemic is behind us. A lot of governments and the private sector in general want to get back to growth. We feel that the obsession with GDP growth is what got us into Limits to Growth predicaments to begin with.

What’s the role of CASSE and your role within it?

I’m the executive director. I established CASSE in 2003, and worked part-time as its president for many years, then quit the federal government in 2017 to run CASSE full-time. I started CASSE because I had gag orders by my agency – the US Fish & Wildlife Service. They prohibited me from even mentioning the conflict between GDP growth and biodiversity conservation.

So you decided to leave that job to focus on the real source of the problem?

How did you get into it?

After my PhD research in the mid-1990s – a policy analysis of the Endangered Species Act. I was looking at the causes of species endangerment in the US. I had a database of the federally listed species, and 18 categories of reasons for their demise. I realised that these categories were a ‘Who’s Who’ of the US economy. At the same time, there was a huge amount of rhetoric from government that there is no conflict between growing the economy and environmental conservation. It drove me nuts – so I invested a lot into studying conventional economic growth theory, and the nascent field of ecological economics.

How did you come to the conclusion that it was impossible to protect the environment and to stop ecological damage as long as we continue to have economic growth?

Through a very deep dive into the nature of technological progress. We should remind everyone what economic growth is – it’s increasing production and consumption of goods and services, in the aggregate. So it’s population multiplied by per capita consumption, measured by GDP. Everybody agrees that there’s a basic trade-off between GDP growth and environmental protection, starting with biodiversity loss. But then some people think ‘well, with new technology, and the circular economy, we can reconcile the two’. I looked into this for years, published several papers and a book.

New technology comes from heavy investment in research and development. And this investment relies on economic growth using existing technology. So over time, in the aggregate, we’re always putting more and more pressure on ecological systems to generate the money to invest in new technology. We’re losing biodiversity every step of the way.

People often say to me – ‘it depends on what kind of economic growth’. But apart from increase in GDP – is there any other kind? I’ve had to use the term GDP growth, because it makes it clear. If I use just growth, or even economic growth, people think I mean that there can’t be any kind of growth – artistic, intellectual, emotional, spiritual etc. – but of course there can. How do you introduce the concept?

Thank you. I have to constantly explain what economic growth is. It can never be immaterial. Notions of ‘green growth’ or de-materialising GDP are not founded in any scientific assessment or evidence. They break basic laws of physics.

How do you show people that economic growth can’t be immaterial? It’s an argument I’ve had many times. People will claim that some sectors of the economy, such as industrial patents, can grow without requiring material growth. But they’re going to need more desks, computers, electricity etc. But that’s not the main point – which is that if a sector grows, then wages and salaries in that sector will grow, and there’s no way to stop that increase being spent on material things.

Exactly. We have to remind people again what economic growth is. It’s not about particular sectors, it’s about the entire economy. And if we look at the role of patents, and information, and research and development, none of that is de-materialised to begin with, but furthermore, what is the new information going to help? What’s it going to be used for? If it’s to contribute to economic growth, it will be used in the service of all the other, very material, sectors of the economy.

I feel that many people just close down, shut off, because the concept of not having perpetual growth is so alien to them. I find it difficult to get past that barrier. Do you experience that?

Absolutely. You just touched on the biggest problem that we face. And a lot of people have vested interests in growing the economy – political parties and their supporters, people who own stocks and shares etc. So it’s a really daunting task. But I know we’re making progress. We have more signatories every day, more invitations to speak. And in Europe, you have a degrowth movement now, in parallel with our steady-state economics movement. We’ve been using the phrase ‘degrowth towards a steady-state economy’, because we all agree that the global economy is too big – it’s unsustainable. And by ‘we all’ I mean steady-staters and degrowthers. The longer it takes for enough people to realise this so that public policy can be changed, the more degrowth we’ll need to get back to a sustainable level.

What successes have you had?

One concrete way, in terms of public understanding, is our position on economic growth – explaining the connection between size of economy and other things, starting with the environment, but including jobs, public health, national security and international stability. Our position calls for stable economies, starting with rich countries, together with ‘steady-statesmanship’ in international relations. We have 15k signatories to that position, and it’s rapidly increasing, which does get the attention of politicians. So we’ve been able to empower politicians to start saying that yes, there is a limit to the size of the human economy.

Just today, we saw an article in the Washington Post by long-time growth obsessor, Robert Samuelson, who has never acknowledged limits to growth. We’ve been talking to him about this for years, and he’s finally starting to acknowledge it. That’s going to help a lot, when journalists write about it.

We have, many times – but there’s been progress. Now there’s less rebuffing, more acceptance.

And the early economists – Ricardo, Adam Smith, John Stuart Mill, didn’t intend for the global economy to grow forever, did they?

That’s very true. The classical economists understood the limits to growth. They had longer-term thinking than our Chicago School, neoclassically-trained or Keynesian economists today.

That’s a long story. I devoted 3 chapters of my book Supply Shock to the development of academic thought on economic growth. I think there has been corruption in various academic disciplines where big money was at stake. One of the ways this manifested was in the loss of land from the production function. So now, in economics textbooks, you’ll read that production is a function of capital and labour. It’s an iconic formula for the economics discipline. When you build your concept of the macro-economy around that, naturally you forget all about land. Whereas Adam Smith and John Stuart Mill, all the way up to Alfred Marshall, really emphasised land as a factor of production. It was land, labour and capital, not just capital and labour.

And what do you say that without growth, we’re condemning poor countries to poverty?

I say that with constant global growth, we’re condemning poor countries – in fact all countries – to longer-term poverty. The push for GDP growth among corporations is partly greed, partly ignorance. Rich countries that have extracted resources from poor countries, and put them into a position of long-term debt and misery, but the longer we chase global GDP growth, the worse that misery will become.

We also get ‘human desires have limits, so we’ll be okay – the economy will naturally stabilise.’ I don’t really take this seriously – just look at young working-class men who become professional footballers and become suddenly wealthy. Look what happens to their consumption levels.

I agree. That’s nonsense. There has to be democratically-based policies based on conservation of resources. The ‘Conservatives’ in the US stole the word ‘conserve’ and changed it to mean the opposite of conserve. The aim is to liquidate as much natural capital as quickly as possible.

How do we stabilise the global economy, in a world of separate countries, all attempting to maximise growth, and in direct competition with each other to do so – a competition that is ultimately resolved by war? No-one wants to get left behind, and risk invasion. They want to grow their economy to grow their military. How can any country move towards stabilising its economy?

Earlier I mentioned our concept of steady-statesmanship in international diplomacy. We need a convention on economic sustainability, where nations hammer out first of all the global limits to growth, and then on a country-by-country basis. Agreements will have to be hammered out. It will be very difficult. It’s clear now to the ecologically-literate, and it should be clear to everyone soon. We can’t keep on doing this. We have to start stabilising in the wealthy countries, with the means to say that’s enough. Let’s stabilise our populations and our economies, and use any surplus generated to help poor countries do the same.

Yes, it’s no good talking to Tanzania or Malawi about steady-state economics when their economies are so much smaller than ours.

Yes and no. The King of Bhutan, who transitioned to democracy and is now the prime minister of Bhutan, introduced an index called Gross National Happiness. He’s now a rock star in international diplomacy. More recently, the prime minister of New Zealand has announced that they’re going to focus on well-being. We’ve been working with Uganda and other less-developed countries, and the symbolism of this kind of thing is tremendous. If a relatively poverty-stricken country is the one to provide the leadership in steady statesmanship – that they’re rejecting the Western idea of perpetual GDP growth, that they want to keep their resources, that their goal in the long-term is balance / steady-state, then that’s very powerful.

Part 2 soon: Why ‘green growth’ is an oxymoron. 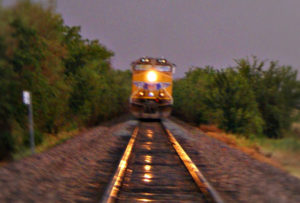 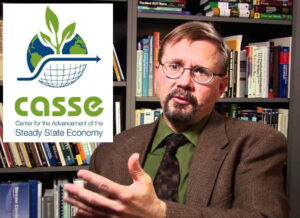 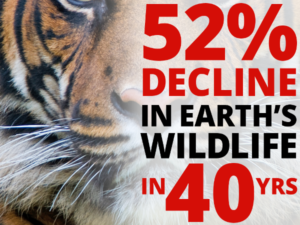