Pushing up the veggies: human composting, coming to an end-of-life facility near you soon

Natural organic reduction, a technique for turning human remains into “soft, beautiful soil” is being billed by its American developers, Recompose, as the greenest of green funerary practices. A licence was granted in March 2019 by Washington State and the company hopes to open for business in 2021.

“a form of natural organic reduction has been practiced for decades by farmers as a way of recycling livestock back to the earth. The safety of this practice has been well documented by many different Departments of Ecology and research universities around the United States.”

The jury is still out on its precise ecological profile for human remains but assuming the technique works, will it catch on? Do you dig your dearly departed enough to plant vegetables in them? And why do we need it?

Well, to begin with, a surprising number of land related issues are raised by the dead …

Historic location, views to die for

Perhaps the biggest selling point for human composting is that it saves precious space. They may be ergonomic when it comes to the need for light or ventilation (in contrast to other forms of underground housing) but graves do take up a certain amount of worldly estate. Exactly how much land is given over to the dead in the UK is hard to establish, and it goes up during zombie walks. Trawling through government, academic and community websites, one quickly loses the will to carry on. The search raises more questions than answers. There are around 20,000 burial grounds, from small medieval churchyards to vast Victorian city cemeteries, and around 270 ‘natural’ burial sites. Safe to say that as a proportion of the country as whole, God’s acreage is pretty modest.

The real problem of course isn’t lack of land per se but rather the impracticality or expense of expanding current sites in built-up or heritage locations. So, like car parks in popular towns, they are mostly full and not cheap. There is still room if you squeeze in or don’t mind sharing.

Newham cemetery in London offers a variation on ‘two for one’ and reuses old grave plots no longer visited by relatives. Move the crumbling remnants of the current inhabitant deeper into the earth, turn the gravestone around, chip out a new inscription, and voilà, a used grave – one careful owner.

The new crop of natural burial sites, located in the countryside, do not face quite the same constraints. They are growing in popularity and demand, as the old joke goes, is likely to remain steady. They are clearly a good opportunity for landowners to access healthy new income streams. Farmer’s Weekly specifically advises:

Of course the business, once up and running, will need to remain economically viable in order to stay sacred; friends and family may not want to pitch up and find the wildflower meadow now adjoins a silage tank, has become grazing land (unless already specified as such, which some are) or, heaven forbid, is overgrown with weeds or bracken.

Coffins can be heavy, man

If you can find a patch of ground convenient or green enough, the next problem you wouldn’t face with human compost concerns coffins and caskets. These come in a bewildering array. Traditional wood, Madam? (pine, oak, poplar). An eco option, Sir? Was the deceased a member of the Soil Association? (shroud, cardboard). Perhaps a budget package? We sell a lot of these (flat pack mdf from China or Eastern Europe). Or a sumptuously padded, bomb-proof, metal casket (much admired in America) which ‘preserves’ the body should you wish to travel around with it for a while or need greater protection against grave robbers.

On a more serious note, demand for locally sourced wicker caskets and grave markers is breathing new life into UK craft businesses, helping to save traditional skills once in danger of dying out. It should also be respectfully noted that in countries with high levels of obesity there is a practical need for robust metal framed containers. The last thing one wants to see at a funeral is an enormous dead relative breaking though a flimsy casket and crashing to earth amidst a heap of crippled pall bearers.

Alongside overkill on coffins, traditional funerals are deeply wedded to other Victorian conventions with poor eco credentials. These include vast arrays of non-organic imported flowers, hearses (the mpg of a hearse is shocking which is presumably why they are driven so slowly) and immaculately kept gravesides, cemetery lawns and paths requiring large quantities of weed killer.

Embalming fluid is also a major concern. It is made from formaldehyde. Though a naturally occurring organic compound it is carcinogenic above certain micro doses and on the verge of being effectively banned by the EU as a cadaver preserver. It crops up in a surprising number of industrial products, including the glues used to make cheaper coffins, cosmetics, tobacco smoke, and the occasional dodgy bowl of noodles. Around 50 percent of all funerals (including cremation) in the UK involve its use. It is even more common in America where mourners are more likely to view the body prior to burial.

Many will find it odd that this method of embalming, pioneered during the American civil war (the Egyptians used a different technique for different reasons) is still in use. A dead body can look disconcertingly alive once pickled and dressed – more healthy than in the days before death – but old habits die hard in the funeral trade. Needless to stay the toxic fluid eventually leaches into the ground along with other unpleasant or non-degradable by-products of body and grave.

In 2018, according to the UK Cremation Society, 78.19 percent of bodies were cremated (out of a total of 616,053 deaths). There were 22 burials at sea. Aforementioned lack of space, cost (cremation is cheaper), disconnection from local churches, and other societal factors account for this preference. However, it is far from green.

The problem is that each body burned releases on average 400kg of CO2. Add in varying amounts of vapourised mercury from tooth-fillings, plus various other gases and you have a deathly discharge the rival of many ‘dirty’ industries. Cremation then is a significant contributor to atmospheric pollution, and potentially hazardous to those exposed to the smoke on a daily basis.

Ashes may also present some toxic threat; they can contain metals such lead, boron, cadmium, chromium, cobalt, copper, tin, lithium, magnesium, manganese, nickel, and strontium. Interestingly, perhaps thankfully, many people don’t actually scatter them, they are left on shelves in sheds or garages; a poignant symbol of a general disconnect from nature. Titanium and other replacement body parts are separated from the burned remains and sold for scrap.

Ecologically damned (despite the recycling efforts) conventional end of life options are often psychologically or spiritually unrewarding. Little wonder the rise of zombie culture. Mainstream death is absurdly old school and preoccupied with concealing mortality behind an expensive, Dickensian edifice.

To Ecotopia when we die

And so we march bravely on to a greener, brighter future. Just as natural burial looks set to replace conventional internment, human composting could be the final nail in the coffin for cremation. Generations to come will laugh (inappropriately) at how we used to mark the end of our lives. Recompose’s website underlines its case thus:

“By allowing organic processes to transform our bodies and those of our loved ones into a useful soil amendment, we help to strengthen our relationship to the natural cycles while enriching the earth.”

Some concerns have been raised as to how they will screen and recycle non-organics like metal fillings, pacemakers, prostheses and artificial joints. The devil could well be in the detail – hopefully not in the soil. The website assures us that ‘most pharmaceuticals – including antibiotics – and other drugs are reduced by the natural organic reduction process as they are decomposed by microorganisms.’

So, would you actually use your human soil (about a cubic yard on average) – spend some quality time in the garden with your deceased partner, relative or friend and then eat the fruits / vegetables of this eco-symbiosis? Will it ever come to pass? Or, like someone I spoke to on Glastonbury High Street recently, are you holding out for the introduction of sky burial? (I initially thought she was referring to a TV channel.) Will any of us be here for much longer anyway? The whole business of death is just another aspect of industrial civilisation, itself hurtling towards destruction. Fixing it is another thing to put on the list of things to do before we die.

This article first appeared in The Land Magazine. Find more on green funerals in our topic introduction. 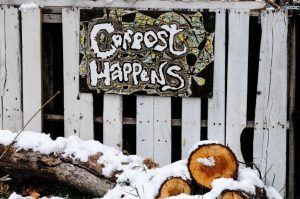 A guide to composting: the fundamentals 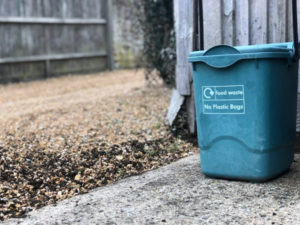 A guide to composting: methods for composting indoors 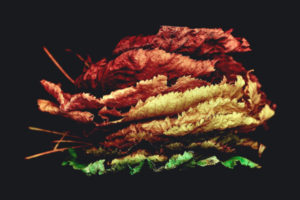 A guide to composting: methods for composting outdoors 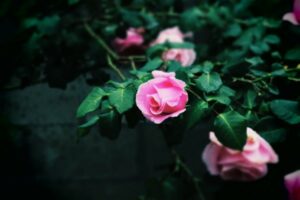 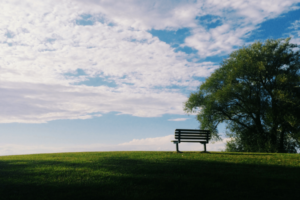 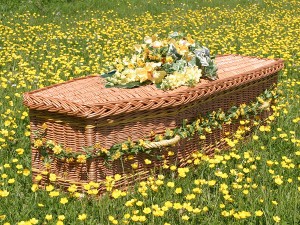