Lowimpact.org: Hi Richard – you run courses and sell products related to a revolutionary new superfast composting technique. What is this idea and where does it come from?

RH: It’s based on the original work of Albert Howard – a biologist who studied and taught at Wye College in Kent, and studied organics in India for 30 years. He was a mycologist and ‘Imperial Botanical Economist’ to the Indian government – a ‘gentleman scientist’ whose speciality was organic disease prevention.

Lowimpact.org: Where did he get his ideas for his composting system?

RH: He studied the composting systems of the ancient Chinese, which he describes in his book the Lost Science of Organic Cultivation. The book is availbable from us, and it forms the basis of what we teach on our courses.

Lowimpact.org: So how fast is it?

RH: We used this system on a project in Uganda. Toilet waste from 35 homes, together with kitchen, garden and other organic waste was collected for a week and composted in a sealed 1.5m³ sealed unit. After 14 days, the original material was unrecognisable; after 30 days it was tested for pathogens, and there were none; and after 90 days it was marketable compost.

Lowimpact.org: Uganda is a hot country. What about in the UK?

RH: The same kind of speeds can be achieved. On a recent permaculture course lasting two weeks, the unit was opened after 12 days and the original material could not be recognised.

Lowimpact.org: How does it work?

RH: There are two boxes – ‘hot boxes’ – sealed units, one of which is in use at any given time, and the other is closed and decomposing. You use box one for a week, then seal it and start using box two. When it’s half full, you ‘inoculate’ it with a fork full of material from the first box. If you’re starting the system from scratch, you go through the process twice before the really fast decomposition starts to kick in.

RH: You select the right starting ingredients – which includes a little cow dung if available, although there are alternatives; you add the right amount of water, and monitor temperature and moisture content during the process. Then it’s just a case of doing the right thing at the right time.

Lowimpact.org: And what causes the fast decomposition?

RH: The real work is done by fungi. Fungi drink a lot of water, so you have to make sure the material is wet enough. If you get the ingredients, temperature and moisture content right, the fungi fructify on a massive scale.

Lowimpact.org: What kind of fungus is it?

RH: As yet unnamed – but we intend to name it soon. It is actually one particular species of fungus, and it exists in every compost heap, but it’s potential isn’t recognised and so heaps aren’t managed to give it the best conditions possible. But if they were, the results would be incredible.

Lowimpact.org: What are the applications?

RH: Well it can be used to rapidly break down all human waste, garden, kitchen and animal wastes. It works well in the UK, and meets environmental and health regulations. There’s a huge potential in developing countries, where often there is no sewage infrastructure in place.

RH: We’ll keep running courses, and I’ll continue to give talks / spread the word as much as I can about Albert Howard’s work. We’ve developed a HH2 (Howard-Higgins) composter unit and an HH3 composting toilet unit that we will be selling.

Lowimpact.org: That sounds really interesting Richard. We’ll talk with you again about how your project has developed, and what our little fungus friend has been called. In the mean time, we’d like to help you spread the word and to bring this method to more people’s attention. 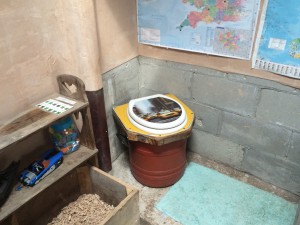 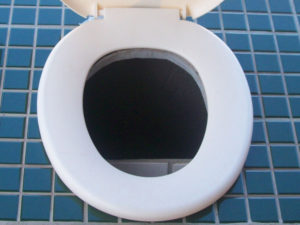