Yesterday’s general election in Spain ended the domination of Spanish politics by the Popular Party (PP) of the ‘right’ and the Socialist Party of the ‘left’, who between them have formed all the Spanish governments of the last 30 years. The media is already claiming that Spain has experienced a major change in its political landscape. But is this true?

New parties Podemos (left, anti-austerity) and the centre-right Citizen’s Party won a third of the vote between them. So that’s:

Add the votes for the minor parties, and, as usual, the vaguely left and vaguely right balance each other at around 50% each. Is this a major sea-change? I don’t think so.

Most voters are in the ‘centre’ – a place where people can believe anything they like as long as it doesn’t threaten corporate power – slightly left or slightly right depending on the values that they believe are most important in life. For the left, those values are unity, justice, compassion, egalitarianism – all good values, I’m sure you’ll agree. And for the right, the dominant values tend to be personal responsibility, freedom, loyalty – again, nothing wrong with any of that.

The share of the population for whom each of those groups of values are dominant seems to always hover somewhere around 50%, ensuring a succession of vaguely left and vaguely right, but always pro-corporate governments. Left or right values can only be implemented within a framework enforced by a corporate empire.

Why empire? Well, there are many reasons, but possibly the most important are a) the amount of money that the corporate sector pumps into the political system in the West (and especially in the US, where real military power lies) – our politicians are well-and-truly bought and paid for; b) the political lobby industry – there are many, many times more corporate lobbyists in Washington and Brussels than politicians, all successfully pushing a corporate agenda; c) the ‘revolving door’, whereby the Empire corrupt our political system by giving politicians cushy jobs on the boards of corporations; and d) the corporate-owned media massaging public opinion and drowning out any voices that suggest that there might be alternatives to the corporate system.

Add to this the fact that the corporate sector is able to undercut any independent or co-operative competition by producing its goods using hundreds of millions of sweatshop workers, putting in 7-day weeks for just enough to eat. It’s an empire with slavery at the bottom and political control of military might at the top – a classic empire if ever there was one.

So it will be business as usual in Spain. But what happens when a party challenges corporate power, such as Syriza in Greece? What happens is that international corporate investors have their money out of that country in a flash, forcing them out of power or to reverse their policies or bankrupt the country. Before long, the corporate media persuade the citizens to return a pro-corporate party and everything is back to normal. We can all then focus on the ‘left versus right’ pantomime that doesn’t threaten corporate power any more than celebrity gossip or football scores.

At the far ends of the spectrum, a small minority tail off into extreme left communism and extreme right libertarianism. The libertarians want to minimise or even remove the state from the equation, but the Empire don’t want this, because they need the state to legitimise their power, to provide lucrative contracts and to occasionally bail them out with taxpayers’ money. The communists want to shift power from business to the state, which is a more direct challenge to their wealth and power. They won’t allow either of these groups to succeed, much less any anarchist movements who want to build a co-operative, non-hierarchical sector at the expense of both corporate and state power.

People will continue to vote because of the issues that concern them – protecting the NHS, slowing down immigration, gay rights, stopping creeping socialism / fascism, but really, most issues don’t concern the Empire at all. They don’t care how many immigrants move where, or whether the US builds a wall along the border with Mexico. Gay rights, women’s rights and racial equality are non-issues for them, because they don’t challenge their power. War is profitable for them, so no worries there – and the NHS will be theirs eventually. Go into any hospital and you’ll see corporate pharmaceutical reps, Costa Coffee outlets and Coca-cola vending machines. It’s only a matter of time before it’s all theirs.

If we want to challenge corporate power we need to move towards a more co-operative / open source / DIY economy that the corporate sector can’t buy, and a new political system that allows absolutely no access to corporate money or influence. How long will it take before the majority realise that we’re never going to be allowed to ‘change the political landscape’ within the corporate-owned parliamentary systems of the West? We have to build a new political system, free from corporate influence. That would constitute a real change in the political landscape. This election doesn’t. 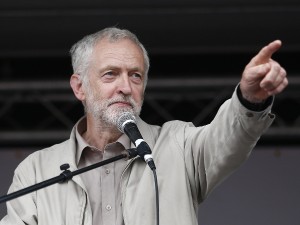