The future will be handmade? The prospects for craft skills in ‘developing’ countries

The Future will be handmade? In the information age, the question has an absurd ring. But I ask after listening to Ashoke Chatterjee at the Artisans House in Mumbai. As a long time President of the Crafts Council of India, Chatterjee tells us that ‘The Future will be handmade’. The question mark is mine. After farming, the biggest form of employment in India is that of the artisan. We are told that about 200 million people make their livelihood as artisans. To compare, the number of workers in India’s famous IT industry may be a fraction of that but unlike them the largely rural based artisans are not a feature of the grand plans. Instead most artisans struggle with the lack of power.

Chatterjee recounts that, “At the Delhi gift fair, we see the exporters only. Hardly any of the artisans are allowed in. When invited for a craft conference in Vancouver, none of the Indian artisans got visas to travel. Through the compromise video conference, the artisans said, “We are not worried by rejection. We are used to it. But please just send us your orders“.” The holy city of Benares may be famous for its crafts but as Chatterjee noted, “Benares University has not honoured any weaver; they may be the greatest teachers but they have no degree”.

With this comes the thought that it wasn’t meant to be this way. Mahatma Gandhi’s proposed flag for India initially had a spinning wheel. To this day, the national flag may only be made with khadi, homespun cotton. Behind that, the march of progress has been another story.

But it’s the population demographics that Chatterjee refers to that really matter; it reminds me of Ivan Illich and his saying that “two-thirds of humankind still can avoid passing through the industrial age”. Illich wrote the celebrated book Tools for Conviviality based on the notion of a convivial society founded on the everyone’s right to self-defined work. Illich’s figures marry up with the reality that Chatterjee is describing. If we can consider the future as a ‘convivial future’, then the majority of humans in our stage of the 21st century, who make a living by small scale agricultural and artisanal work can at last enter the picture as architects of the future. 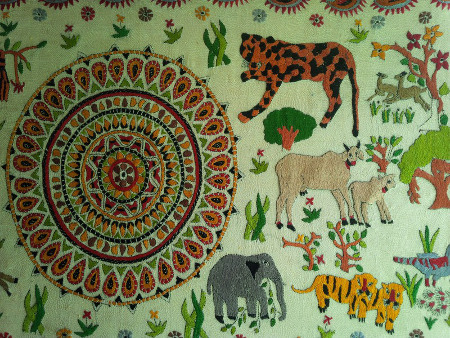 We have become aware of the urgency of other issues. Looking at the tapestries from Santiniketan, West Bengal, that I saw at the handloom expo in another Mumbai suburb, it’s a picture of society in which nature is integral. When we think of our ecological footprint and eroding carbon sinks, the picture becomes even more relevant to contemporary concerns. Then in a back-to-front way, given the crisis of work in industrialised countries and the increasing importance of the ‘creative sector’, this type of livelihood is a paradigm for the future. But the problem is that it hasn’t passed through the hoops of modernisation and integration into another value system, that of finance and technology that’s driving the progress. And that’s an obstacle to its evolution and even its existence.

Jacques Ellul, who coined the phrase Think Globally, Act Locally can partly explain this logic by going back to the early days of the Industrial revolution. In 1764, James Hargreaves had invented the Spinning Jenny to increase the production of yarn tenfold. More than the weavers at the time could ever handle. Thirty years later, Edmund Cartwright then invented the power loom. As Ellul points out in his book The Technological society, machines don’t work in isolation. Machines beget machines which re-fashion human labour into the way they work; into their modes of operations. We have the beginning of a sort of machinic eco-system. With capital investment, the more a machine’s technique is perfected, the more inventive it becomes in methods of pulling in the ‘non-producers’ (largely peasant farmers and artisans) to put them to work in its service. Which in its turn produces the consumers to drive the cycle. It’s the pattern of things that was and will be. The 18th century pattern thus is still in the 21st century. It’s of no surprise then to hear Ashoke Chatterjee speak of the constant pressure in India today to change legislation so that power looms can be added to hand looms for the bulk of the production process (save the last stage so retaining the hand crafted kitemark). For the artisans, this means both constant vigilance and resistance to preserve their livelihoods as they have no access to capital for expensive infrastructure.

Is it possible to think outside of this pattern of things, to break out of the chain reaction, without being anti-machine or anti-progress? To create machines for another version of progress based on self-defined work. Not so easy in this civilisation, Ellul argues, for ours is a civilisation of means, not of ends. When means are more important than ends, the multiplicity of means progressively reduce to the one: the most efficient. This closes down the range of possibilities. Invariably much of the conflict in our age is about that; whether they are dressed up in religious, tribal or ideological terms. In his talk, Chatterjee makes a passing reminder to the so-called Naxal corridors of India, the tribal forests and hinterlands where Naxalite Maoists are engaged in a bloody guerilla war. They are largely artisan based cultures whose livelihoods are threatened by ever advancing developers backed by large funds. 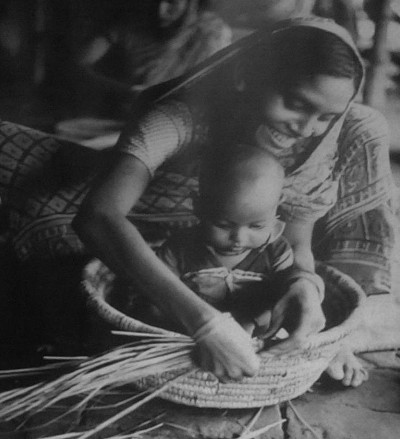 We are then referred to the image (taken from the talk) of the mother and child weaving a basket. What is going on in this picture Chatterjee asks? Someone mentions organic skills transfer – the little kid is learning. Of course but above all, the image represents ownership of the means of work. And it is work ‘at the point of need‘ without a need to migrate to the cities. But there are many who will worry about romanticising the image. I think of entrapment within the generational cycle, of enforced labour, lack of personal life choices. I have seen children working at looms when they could be at school. I recollect Herbert Read‘s writings on why our modern age is so different to the past; that freedom to choose who we want to be and want to do. Read himself was the son of an Yorkshire tenant farmer who went to university. His idea of a modern society was one that ‘guarantees the utmost equality while preserving individual freedoms, including the right of an individual to become detached from those community interests into which he or she had been accidentally projected by birth‘. That right of course surely applies here to the little child in the basket, his future.

If there are contradictions in how we see the image, they lie in why we read it in binary terms, not multidimensional possibilities. For when it comes to technology, it should be a case of what enables living realities. But that’s just not how it works, as history or circumstance for most part shows. So the real question facing us is whether the mother and child in the picture can develop their own opportunities to advance their lives and thus save themselves from being forced into the servile menial trades? In Mumbai, or Dubai, or so forth. Realistically that is the only means of progress offered to them. The route to be a part of the world of global labour and finance eager to draw them. Or it is possible to imagine another system of progress in the 21st century based on enablement, not exploitation.

Chatterjee points out that ‘the woman is wearing latex gloves. The poor have no phobia about about modernity and technology choices. If it is available they will use it‘. Certainly many now have shared use of cellphones, though it’s by no means universal, and that changed lives dramatically. Just like the village TV did a generation ago. In turn aspirations change. And that also affects the means of work and livelihood. As the activist-philosopher Franco Berardi argued, in the industrialised world, the cellphone has replaced the 70s office for many, a radical change in the idea of work. Through technology, whether we are now digital artisans, or traditional artisans, we come into a hitherto unknown common space, progressively on the same road to a Future. Much more so than in Marshall McLuhan’s 70’s ‘global village’ in that we are beginning to use global tools to interact, not just watching and consuming. The village TV is one thing but the village 3-D printer is another. If it’s made available to the artisans on the same terms as the handloom, the politics of technology, its hidden weave changes. 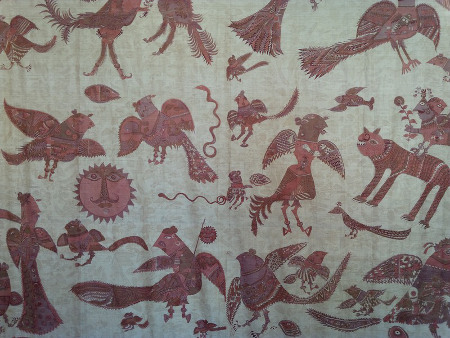 At the start of 20th century we were beholden to mass mechanised production. Today we are entranced with visions of a digitised world with new forms of making taking over. With both, the greater question is how will it matter? Without that, we have no means to address what we are going to be doing and how we are going to earn our daily bread.

In the 21st century then, artisanal objects are no longer the quiet pretty things we thought they were. Listening to Ashoke Chatterjee, I see something politically incendiary about them, through what he is saying though he doesn’t express it that way. It’s really the force of the statistical logic that is revolutionary as it implies a different means of progress for the 21st century than for the 20th. We understand that the 20th and the 19th centuries are unrepeatable in ecological terms but in what way? How the majority of humans are making a living today and how they enter the future has a lot to do with it. 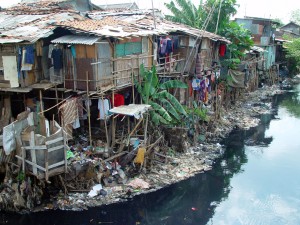 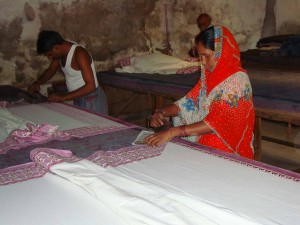 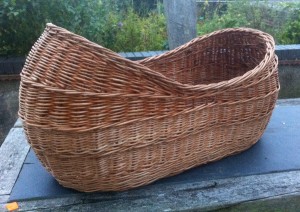 How about learning how to make a natural heirloom for a special occasion? Wicker baby cradle 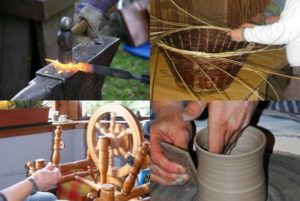