Why we should support small fishing boats over super-trawlers, Part 3

Here’s the third and final part of my interview with Caroline Bennett, founder of ‘Sole of Discretion’ (a community interest company that sells fish caught by a collective of small fishing boats in Devon) about why we should support small fishing boats over giant super-trawlers. We’re talking about how government quotas benefit super-trawlers and disadvantage the small boats.

Let’s get on to quotas. So government quotas for small fishing boats. Can you explain a bit more about what that means?

In the 90s, the right to fish was changed to something that the European Fisheries Committee decided was called quotas. In the annual quotas discussion in the European Commission, tonnage quotas are allocated to countries, and then DEFRA decides what proportion of that quota goes to which type of vessel. In the 90s, allocation was based on historical catch. This suited the small-scale guys, because anything under 10 metres never had to disclose their catch. They were considered such an insignificant part of fishing, they didn’t even have to record it. Nobody knew they were catching so much fish. When the quota system was introduced, small vessels got almost nothing (4%), because the government had no record of what they’d historically caught.

Let me just read something that’s on your website, which blew me away:

“The UK fleet is made up of 5,911 boats, 21% of which are more than 10 metres in length, while 79% are 10 metre or smaller – the official ‘small-scale, inshore fishing’ definition, and the boats that Sole of Discretion work exclusively with. In terms of access to fishing rights (quota), the under ten fleet has less than 2% with the larger sector taking the remaining 98% share.”

Yes, it makes you think ‘how could you have come up with a system like that?’ But it’s because the small fleet catch didn’t have to be recorded, so the government had no idea they were catching as much as they do. This comes back to this idea that we need scale – that without the giant supermarkets for example, we wouldn’t be able to feed ourselves. Of course we’d be able to feed ourselves. We’d have small-scale grocers and butchers and bakers popping up all over the place.

Of course some fish aren’t quota species – not deemed commercially worthy of giving a quota to. You can fish as much as you like of non-quota species. So there are ways of getting around it. But small vessels have no leeway on the quota at all, whereas the large boats you can get right to the end of the calendar year before you can settle your books in terms of quota. So you have the whole year to swap quota with another vessel etc. It’s another way that small vessels are disadvantaged.

Is there any scope for changing this system? Is the government amenable to talk about change?

They are, actually. They’ve reallocated some quota to smaller vessels in the past. The big boats took the government (and Greenpeace) to court over this ‘misallocation’, and the courts ruled against the big boats. So there is appetite to change things. Richard Benyon, the fisheries minister a while back, was really great on small fishing boats.

So the government aren’t against small fishing boats.

No. And even the EU said that from now on, all quota should be allocated based around social, environmental and profit factors. So it’s not just about economic interests. So everybody is beginning to see the benefits of small-scale fisheries. They’re just harder to manage.

And the UK government?

Most small-scale fishers voted for Brexit, because they believed that they’d get the right to fish UK waters, with no foreign super-trawlers allowed within 12 miles. In fact they were sold that line. But we didn’t get that 12 nautical miles – it was back to 6. So we still get massive foreign trawlers sitting at 6 nautical miles, hoovering up what they consider their entitlement. I don’t have a problem with the nationality, just that they’re so huge, and they take so much. So the quotas the small vessels thought they were going to get didn’t materialise.

Something else I read on your site:

“Something over 50% of the UK’s national quota is owned by foreign interest, with one Dutch supertrawler company owning 25%. These supertrawlers can fish up to the 6 nautical mile limit, limiting the number of fish that make it through to be caught by the thousands of small-scale boats, plus it limits the ability of the small-scale fishers to leave their static nets out beyond 6 nm for fear of the supertrawlers towing it away.”

What can be done about that? That sounds crazy.

The whole thing is Wild West. There are I think just 2 boats that monitor the UK coastline, whereas the French really protect their coastline. They have the vessels to monitor it. But it’s legal. The attitude of the super-trawlers is that ‘if you’re stupid enough to leave your nets in a path that we’re perfectly entitled to trawl, that’s not our lookout, it’s yours’.

So much to do – but my first goal is to allow people to choose not to buy fish from the giant boats, and to support small fishers instead. From there you can build. I’m actually working with the Soil Association to help build a differentiation between low-impact, small-scale fishing and the bigger boats. I’d rather work with the Soil Association than form a new brand, because there are so many out there that it can be confusing; and the Soil Association does have clout. It can give the consumer confidence in their choice.

We’re looking to get small fishers better prices for their fish. But recently, fish prices have been very high. So I’m glad you said our fish box price was good – thank you for saying that. £15 per kilo for bass – that’s what the fishermen get on the quay – that’s before we’ve gutted, filleted and packed it and delivered it. Fish prices are crazy high. During Covid restrictions, lots of small fishermen wanted to work with us to get fair prices. But since Covid restrictions have been lifted, prices have become ludicrously high. You can get £100 for one turbot. So with the Soil Association standard, we can say to fishers that if they want this certification, they may have to incrementally change the way they fish. For example, they could fish with a slightly bigger mesh size.

So that the younger fish can escape?

Yeah. They may need some compensation from the government for doing that, but there is a historical precedent for re-commissioning fishing boats. Also, a lot of fish spawn during Jan, Feb and March. Let’s reduce fishing in those periods to allow stocks to replenish. Fish lay so many eggs, it might take just a few years for numbers to recover. Many of the fishermen agree, but it has to be done collectively. I’m also hoping that with a partnership with the Soil Association, we can suggest policies to government. The government is always looking for easy wins, and if someone else has come up with a solution, then they can support it. So I want to present the government with an easy alternative.

Good luck. There was one more thing I saw on your website:

“The second point to note is that the small-scale fishers were never permitted to own their own quota, unlike the large-scale operators who sold a lot of their quotas.”

Why aren’t the small boats allowed to own their quotas when the big ones are?

So the big ones have the ability to trade quota with one another. The producer organisations pool the quota for them. Plus because there were no records of historical catch by the small boats, quota went to the group, not the individual boats. A big problem with new fishers coming in is that they can buy a boat, but it doesn’t come with a quota (you’d have to buy it, on top of the boat), whereas the bigger boats do come with quota.

What can people do to help, apart from become a customer, obviously?

I’d like to hope that with the Soil Association’s help, we can spawn lots of similar little organisations around the UK coast.

That’s what I wanted to ask – do you think there’s scope for this to be replicated?

I’d really like to think so. We can’t supply all the ethical consumers in the UK. Nor would we want to.

It would be better if you focused on Devon and Cornwall, wouldn’t it – to reduce ‘fish miles’.

Yes. Then allow other communities to follow the template. It would be good to have an umbrella organisation to provide support and guidance, then small groups can all work to that standard. Health and safety and other requirements currently make it so difficult for small fishers to achieve.

We’ve found that a lot. For example, industrial agriculture finds it easier to meet the regulations, because it requires a smaller percentage of their income. We’re trustees of a small organic farm in Wales. They produce beautiful cheeses, but they can’t sell them to the public, because they’d have to spend tens of thousands on stainless steel equipment. But they don’t need it. Their facilities are fine. The regulations are in response to foot & mouth, and other problems that we’ve seen – but they weren’t caused by the small producers. They were caused by giant, industrial agriculture, but it’s the small producers who have to pay.

Exactly that. Small is Beautiful – so arm the small-scale guys with the know-how. It has to work on the human scale – in agriculture and fishing. I think it’s a joy to be able to work with these stunning creatures that come out of the sea.

I’ll add your details below the video, and in the blog article. I hope you get more customers from it. And a final question – if you had a magic wand, what would you do?

I’d close the sea in peak spawning time – even for a couple of weeks – just to let the fish come in, do their business, and float off. As long as there are plenty of eggs in the sea, they have a chance.

And what time of year is that again?

Caroline, it’s been great speaking with you.

Likewise Dave, it’s so nice to team up with fellow anarchic people.

That’s a word I hope comes back into fashion (nb – or the Overton Window) soon. And we’re going to stay customers of yours.

Thanks for the kind words Dave. 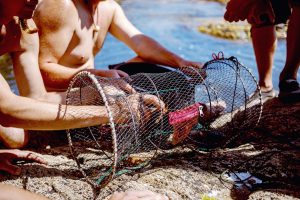 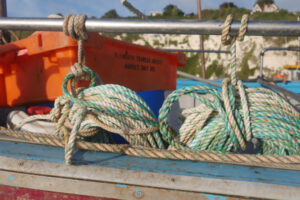 Why we should support small fishing boats over super-trawlers, Part 2 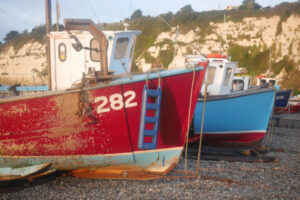 Why we should support small fishing boats over super-trawlers, Part 1